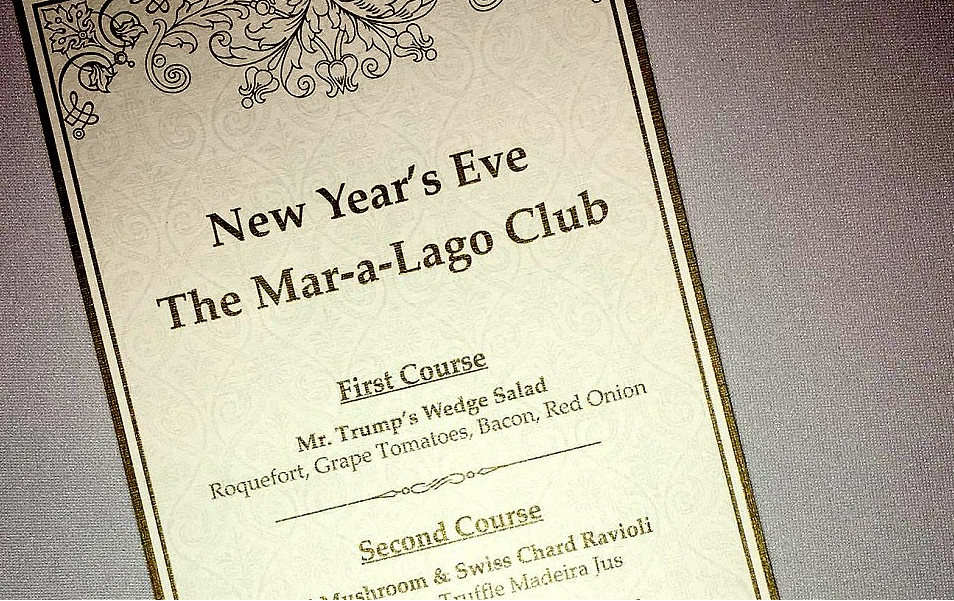 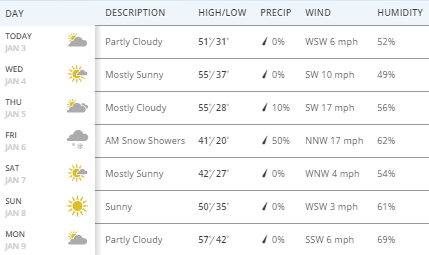 In 2016 NM was one of 3 states (including DE and CA) that gain the same amount of new residents as it lost.

Is looking for 40-45 leaders to make up its next core class and another group of young professionals (ages 25-40) for its Connect program.

In case you missed it during the holiday chaos, U.S. Rep. Michelle Lujan Grisham  announced she will be running for governor of New Mexico.

Getting her ducks in a row: With a Republican administration under Donald J. Trump only weeks away, Prime Minister Theresa May of Britain scolded Secretary of State John Kerry last Thursday for his speech criticizing Israel — a public jab that would have been highly unlikely any other time during any US administration. Meanwhile, most of Europe praised the speech. Conventional wisdom is uncertainty surrounding the impact of BREXIT has the PM positioning for tea and quackers with the new administration.

Getting their ducks in a row: one way to "drain the swap" is to change the definition of "swamp." But what do you do with all those dictionaries? Instead, on Monday night Congress "did a NC." The House GOP voted to put the Office of Government Ethics under Congress's control. [Just a short refresher course: OGE is the independent body that is a watrchdog for corruption in Congress.] The secret vote, taken behind closed doors and with no opportunity for public debate, essentially weakened/obliterated ethics oversight by letting Congress be in charge of the body that polices it. How do'ya like them apples? PEOTUS didn't - or at least he didn't like the timing and made his displeasure clear. Game over for the foreseeable future.

De-ducks. That would be The Denver Broncos and Carolina Panthers: Not in the running this year when the NFL playoffs begin on Saturday.

Sitting Duck: Over the weekend, 39 people were killed and dozens injured in an Istanbul nightclub. ISIS has claimed responsibility. This is the 2nd ISIS attack in Istanbul within the past year. How does Turkey protect itself? The 6-year and counting Syrian civil war is way too close for comfort. ISIS wants to make a land grab near the Syrian-Turkish border, and Turkey has joined the fight against ISIS. There doesn't seem to be any way out of this "being in the wrong place at the wrong time" dilemma - ditto:Russian Ambassador to Turkey who was assassinated last month.

The Entire Duck Pond: Since recent history gives us a pretty clear picture of how little the two parties accomplish on a bipartisan level, maybe winning the trifecta is the answer. Time will tell, but when the 115th Congress convened yesterday, a Republican president-elect, and Republican controlled House and Senate spelled TRIAD. Here's what else is on the Scrabble board: reshaping the nation's healthcare delivery system, restructuring the tax code, beefing up foreign policy, repairing a crumbling infrastructure and last, but not least, MAKING AMERICA GREAT AGAIN. Game on!

DUCK!!!!  .Well, not exactly. It's actually "You're terminated."  Or so saith former California guv, Arnold Schwarzenegger on The New Celebrity Apprentice. "Hey, Arnold - don't worry. If this gig doesn't work out for you, there's always 2020."

THIS JUST IN:  Megyn Kelly Is Leaving Fox News for NBC. You're Hired!

THINGS TO CONSIDER - aka Insomniacs want to know

Repeal and Delay: Trump and the Republicans want to get rid of Obamacare. But since the Republicans have been grousing about it since 2010 when it was enacted, they haven't come up with a plan of their own.They haven't even managed to cobble together talking points for a post-Obamacare health care system. Meanwhile,some Big Dog senators like John McCain, Susan Collins and Lamar Alexander are saying nyet on repealing the Affordable Care Act without a Replacement Plan. If ACA is such a travesty, how come record numbers of enrollees opted in during December? The idea of repealing ACA without a replacement plan is a nightmare for those millions of Americans who have benefited from it.  What to do in the middle of the night?  Leave a voicemail with your representatives in Washington and let them know how you feel.

The Russians. So what exactly did Don Jr. mean when he said "Russians make up a pretty disproportionate cross-section of a lot of our assets." ? I don't want to be losing sleep by reading too much into  the Trump-Putin bromance, but Trump appears to have a deep financial dependence on Russian money from persons close to Putin. This matched to a conspicuous solicitousness to Russian foreign policy interests where they come into conflict with US policies (which go back decades through administrations of both parties) just isn't conducive to a good night's sleep. Really.

REBECCA - as in Ferguson. Will she get to sing Strange Fruit at the inauguration? VIA Twitter  "I’ve been asked and this is my answer. If you allow me to sing “Strange Fruit” a song that has huge historical importance, a song that was blacklisted in the United States for being too controversial. A song that speaks to all the disregarded and down trodden black people in the United States. A song that is a reminder of how love is the only thing that will conquer all the hatred in this world, then I will graciously accept your invitation and see you in Washington. Best Rebecca."  My money is on The Mormon Tabernacle Choir, folks. 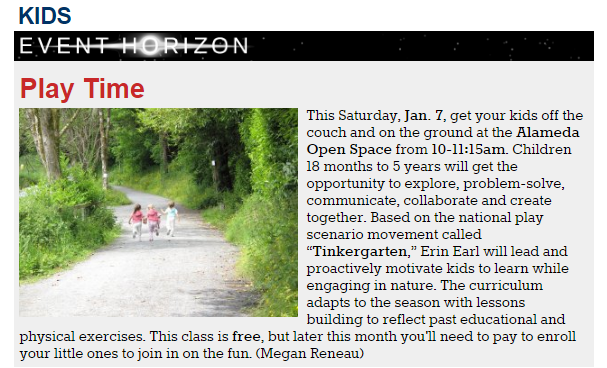 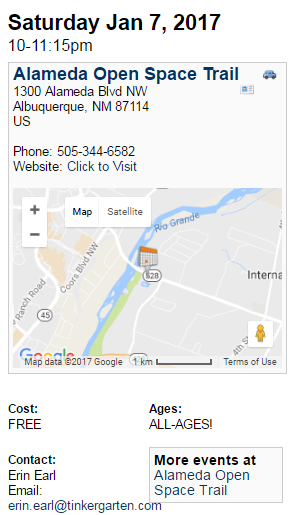 To learn more about Tinkergarten and what's happening in Albuquerque:  PLS CLICK HERE

Get ready to help them implement a progressive agenda to move NM forward.
Elected leaders. Issue advocates. Progressive Voters. One day. One place. One movement.

The NM Progressive Summit is for anyone with an interest in progressive politics—bloggers, organizers, social justice advocates, union workers, organizational leaders, college organizers and activists from across New Mexico.

Our state and country are at a critical juncture, and the decisions we make in the near future will have lasting implications for the legacy we leave behind us. Whether it’s advancing pro-active legislation at the state and federal level, guarding against conservative rhetoric, or challenging corporate political corruption of our legislative and electoral process – the 2016 NM Progressive Summit will confront the diverging paths forward and what we can do. 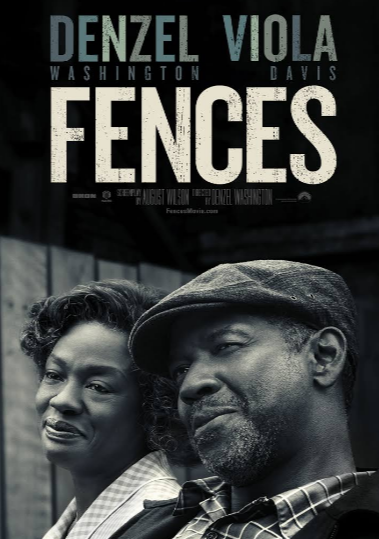 You can quote me: "If Denzel Washington doesn't get the Oscar for Best Actor for FENCES, it's rigged." 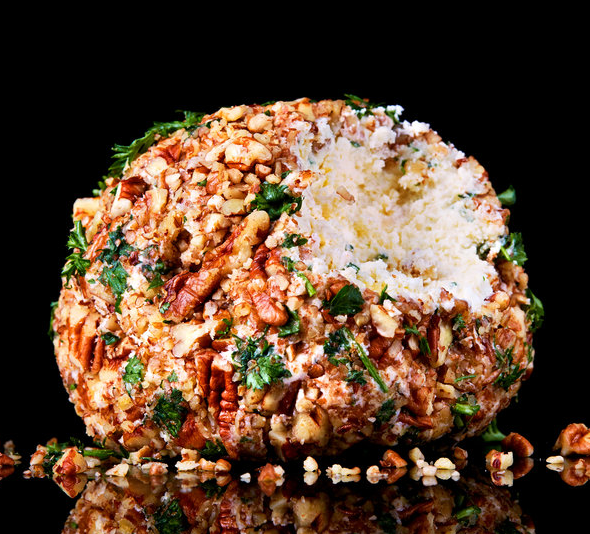 Remember when I said December was the Olympics of cheese balls? I had this at friends on New Year's Eve and it is a winner! 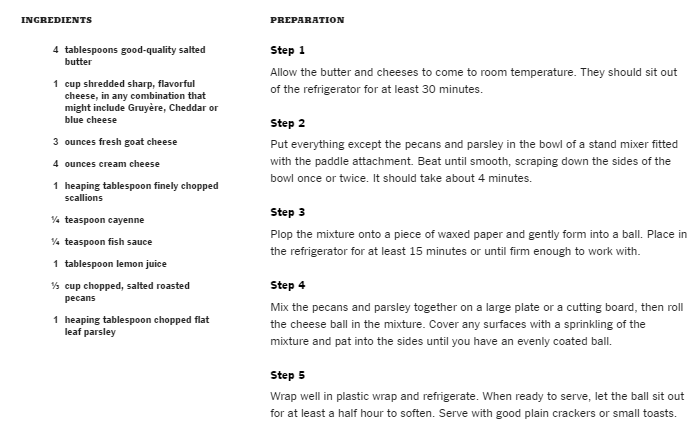 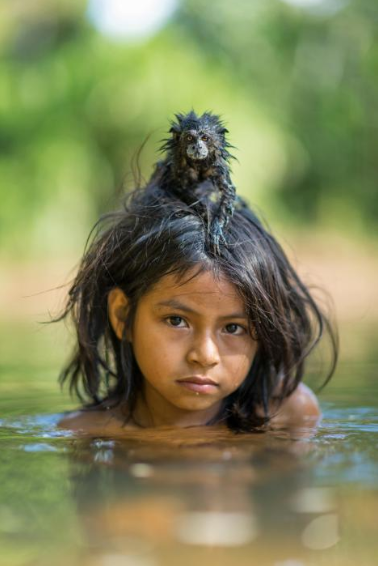