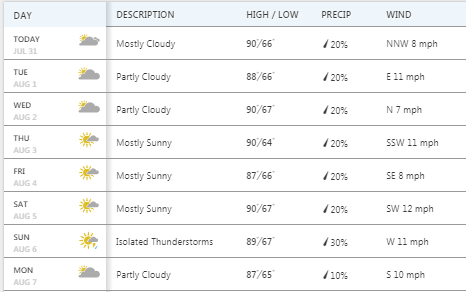 Something to keep in mind: Saturday marked 66 days until Election Day, Oct 3rd.

It's time to find out who's running, for what, and who you like. Early Voting begins Sept. 13.

The Dog Days of Summer and then some...

To the Greeks and Romans, the “dog days” occurred around the day when Sirius appeared to rise just before the sun, in late July. They referred to these days as the hottest time of the year, a period that could bring fever, or even catastrophe.

Someone needs to tell those folks in DC that the Dog Days were better left behind in July and A isn't for Arf, it's for August ---Is John Kelly is the guy to deliver the message?

Yikes! What a week it was: two stage 4 cancer Senators making haste to DC for the ACA Repeal and Replace Vote and Susan Collins and Lisa Murkowski unwavering in their stance. Please call them all and thank them on behalf of the 24 - 40 million people who will continue to be insured. John McCain did his best to rally the Republican Senators with a "This is What the Founding Fathers Expected of this Body" speech - only to learn his Hail Mary talk apparently fell on deaf ears. Is he a MavericK? Well, he did finally cast the deciding vote, but my vote goes to the gals.

It was another one of those kind-of-difficult-to-follow-the-President's-thinking times - at one point he had 100% confidence in his Cabinet and Reince Preibus, but RP got the ax, replaced by the Mooch, only to also get the ax yesterday, while the ink on his contract hadn't even dried. Many who had never considered Jeff Sessions anywhere near the "likely to Friend" category found themselves curiously sympathetic and supportive of him. And that brings us to Gen. John Kelly - who thankfully got rid of Anthony Scaramucci faster than you can say "How To Lose A Guy in 10 Days" or, the latest drama:  "Why Did He Think Dictating that Response Was Ever a Good Idea?" (That might take a bit longer, IMHO).

Meanwhile in the rest of the world, an international survey by the Pew Research Center found that favorable ratings of the United States have decreased from 64 percent of people across all countries surveyed at the end of Barack Obama’s presidency to 49 percent this spring. The new figures are similar to those toward the end of the George W. Bush administration. This may actually get the attention of the GOP - who have always believed our reputation abroad...uh, trumped (??) concern about domestic issues. The world community is not only beginning to view the US as irrelevant and inclined to go forward without us, but a WAPO reporter compared the President's treatment of the President of China to his treatment of Sessions. This is not good. 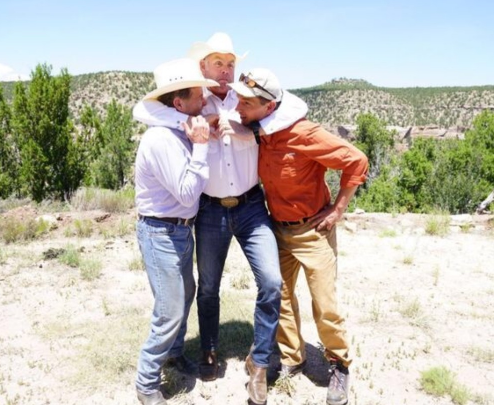 So what about us? Over the weekend, Senators Udall and Heinrich hosted the new Secretary of the Interior, Ryan Zinke, who is not (unlike the photo above) horsing around when it comes to budget cuts. Even though he tried using his muscle/arm-twisting on Senator Murkowski to dissuade her from voting with the Dems last week - he neglected to remember that she had a pretty commanding grip on his Department's purse strings (e.g., Murkowski chairs the Senate energy and natural resources committee and also oversees the confirmation process for the Interior Department..) Uh-oh. Anyway, back at the ranch - Tom and Martin took Ryan on a ride and hopefully impressed upon him that the Sabinoso Wilderness has a pretty nifty access plan in the works (in the form of a 4,000 acre ranch and a private donor) for that tract of wilderness and NM wants/needs his approval . En seguida y con su permiso, por favor, hombre, So stay tuned and we'll see how this goes down. 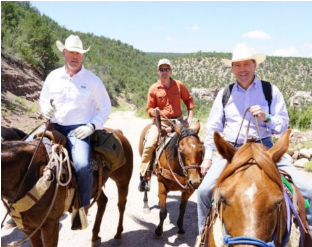 All hat, no cattle? Let's hope not.

ABC COMPREHENSIVE PLAN UPDATE - Albuquerque's new and controversial zoning plan to update the city of Albuquerque is the city’s vision to take Albuquerque into the 21st century. It has met  hesitation from neighborhood associations around the city and time is running out. Last week the City ran some Zoning 101 classes but I think this is under most people's radar, unless you are the current Mayor, a developer, in commercial real estate or happen to live in one of the many historic neighborhoods. This is another instance where grassroots activism is needed - if you don't speak up now, you'll have to wait 5 years for your next chance. Note to Diary: Call your City Councilor. And if you live in an odd-numbered City Council District, remember - you get to register your opinion on how that conversation goes with an October vote. (Meet the Candidates: CLICK HERE)

The City has a page on its website that features future and ongoing events. Check it out here

This is the website  [ CLICK HERE ] for the Albuquerque Convention & Visitors  and one you might want to "bookmark." The visitor-directed content provides an enormous amount of information on what's happening around town and is a great "one stop shopping" site to visit when you are  out of ideas and looking for something different to do.

This is one of those Duke City places I knew about but just never seemed to get around to visiting. Per their website ( CLICK HERE) , It's a " one-stop multiple-option destination of eateries, confectionaries, adult drinkeries, shops, plazas and places to hang out, constructed entirely with shipping containers as building blocks.  Green Jeans is an indoor/outdoor gathering place that builds on ingenuity, fun and localist choices with a message of community, healthy living and fun."  Now that we've descended from those horrendous mid-day high temps, sitting outside is a lot more appealing. If you find yourself in this vicinity and are hungry, thirsty or just curious about a shipping container complex: Go for it. 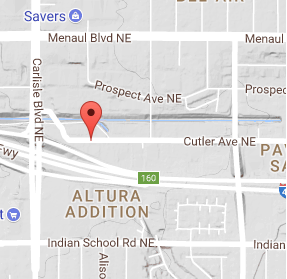 Don't feel like cooking? Two good spots to check for ideas around town:

Meet Gil Garduno and get a local's take on Albuquerque's food scene. His blog and website are Good Reads about Good Eats.

Or a different slant - what visitors have to say about Duke City grub: CLICK HERE

BOOTS ON THE GROUND - that would be me...

Best burger I had this week was at Duran's Pharmacy, just east of Old Town.

ADVANCE WARNING: Are you ready for the Lobos?

Take a look at the Game Schedule for the UNM team you follow by CLICKING HERE.

Happiness is still for many of us....

Have fun out there.