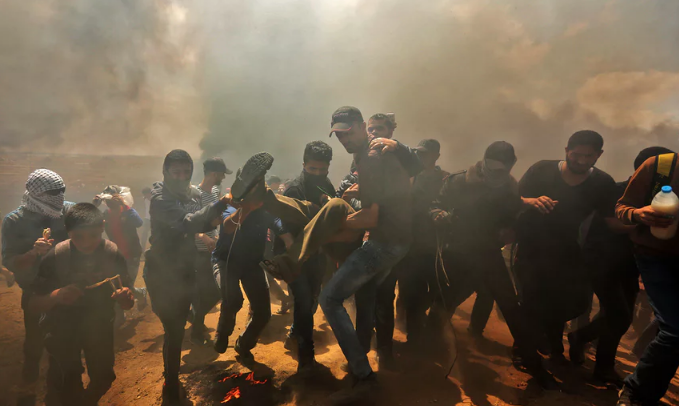 Pictured above: Prince of Peace?* 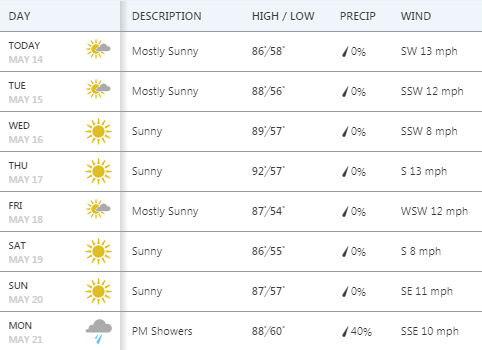 1787: Delegates gathered in Philadelphia to draw up US Constitution

1998: Last episode of Seinfeld on NBC 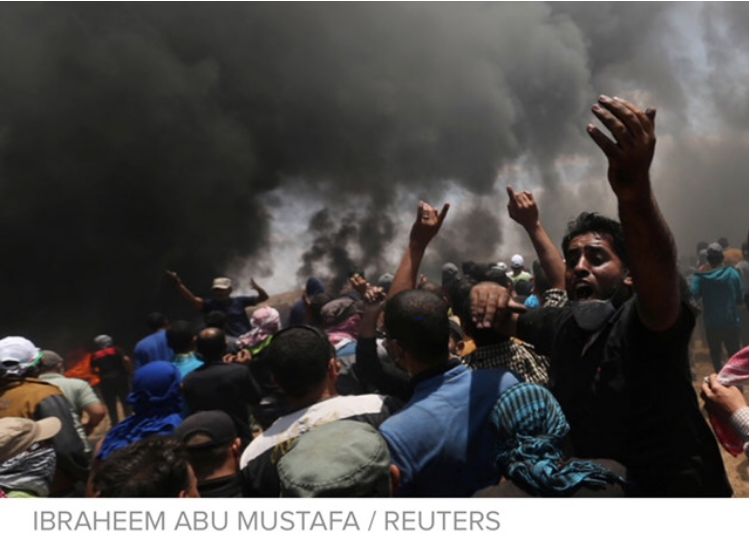 "What a glorious day for Israel." - Netanyahu

2018: *Israeli forces shot and killed 55 Palestinians ( an 8-mo old infant also died from tear gas), wounding at least 1,200, as tens of thousands protested the opening of the US embassy in Jerusalem. (There was a reason previous POTUS thought this was a bad idea...)

Elsewhere in the World ... Right here on Sunday

THIS SUNDAY AT 2PM:

The 4th Annual South American Folk Festival seeks to unite Albuquerque’s South American community in a day of cultural experience and connection through music, dance, and food. In addition to food vendors from participating countries, the festival will feature traditional dancers from Colombia, Peru, Venezuela, Chile, Brazil, Argentina, and Ecuador.

Highlights of the event include local band Baracutanga performing a traditional batucada and performances by Argentine Tango instructors Eva Garlez and Pablo Rodriguez, Peruvian dance/choreographers Fiorella Vera Adrianzen and Yessenia Lentz, and the Odara Dance Ensemble. The featured band will be Houston-based Bamuayā, led by Venezuelan percussionist Reinaldo Araujo. A Latin fusion group with musicians from all over Latin America as well as the United States, Bamuayā will be releasing their latest CD in Albuquerque.

And, proudly representing the Colombian culture, this event will again welcome Raices Colombianas who, for the past four years have delighted us with their traditional dances, folkloric costumes, and energetic choreographies. They will be presenting two songs, both of which have folkloric rhythms with roots in the African cultures that integrated with the native Colombian culture.  These dances reflect the themes of courtship and slavery, but, at the same time, tell the stories of ordinary activities like fishing and agriculture. The costumes have a Spanish influence.  Men’s costumes in general are white and in light materials with hats and scarves. The women use wide skirts called polleras.  In addition, women wear big floral arrangements in their hair to complete the costume.  Instruments commonly heard in this music include drums, flutes, marimbas, and maracas. 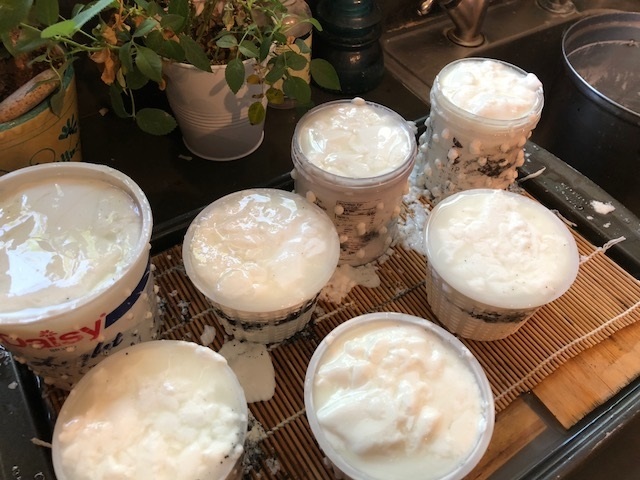 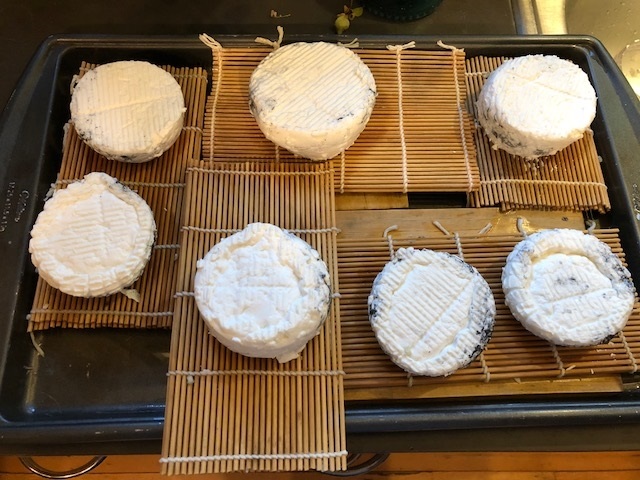 Okay, okay -  Okay,okay, okay...who's to say it wasn't just my Dutch DNA? But for those of us who watched with unfettered delight as unpasteurized milk miraculously became butter (one of my earliest kindergarten memories), making cheese is the adult version of that experience and it does not disappoint.

As a former brewer, the fact that you actually have a tangible result within 24 hours is pretty swell. And the likelihood the cheese will be ready to consume, while my beer would have still been circling its specific gravity is big time enticing.

So what's it all about, Alfie? With a small round of St. Marcellin going for $12.00 - if you can find it, Epoisses at $20...maybe it's time to explore other options. The idea of making cheese is actually more daunting than its reality.

Not only is your cheese likely to be less expensive (once you amortize your start-up costs), you can use better ingredients, you can revel in your own private farm to kitchen experience, and seriously? It's fun and there's a good chance it will taste better. Ooh la la...imagine walking into your dinner hosts' front door bearing your own artisanal cheese. Sacre fromage!

(And if it's a toss up between cheese and beer, consider enjoying a few beers while you're making your cheese - that'll work!)

If you're not fortunate enough to have a new friend teach you, and want to learn more: CLICK HERE

How much of a purist are you? If you loved the Stieg Larsson MillenniumTrilogy and felt life as you knew and were enjoying it came to a crashing halt with the death of Larsson in 2004.....well, Stieg might be rolling in his grave, but Lisbeth Salander has been resuscitated by David Lagercrantz (above left).

This didn't just happen.The 4th and 5th books in the series were published in August 2015, The Girl in the Spider's Web, and September 2017, The Girl Who Takes and Eye for an Eye. It's just taken me that long to reconcile myself to the unlikelihood of Larsson's resurrection and my inability to live without Lisbeth Salander and Mikael Blomkvist.

In process. Make no mistake: David Lagercrantz is no Stieg Larsson. However, when I turned the last page of Spider's Web, I reached for Eye for an Eye without a pause. It's not impossible I'm looking for a pony in the latter, but at the very least, I'll be spending time with some old, slightly misunderstood friends.

VERDICT: The first - worth the effort. The second? The jury has yet to convene..

This is early voting for the June 5th Primary. If you need further info regarding voting locations, CLICK HERE

Not since William McKinley.... 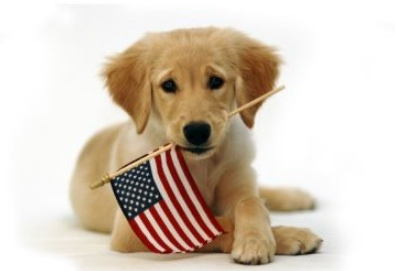 ...has there not been a dog in the White House. 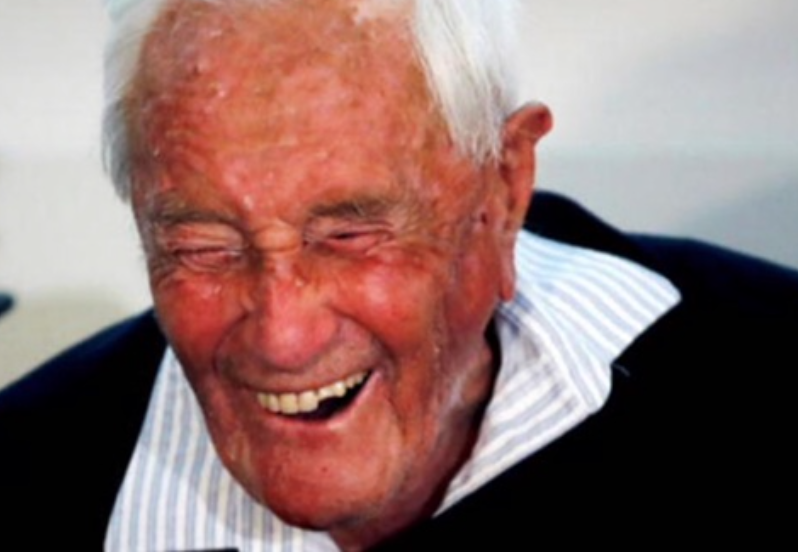 "At my age, and even at rather less than my age, one wants to be free to choose the death and when the death is the appropriate time."