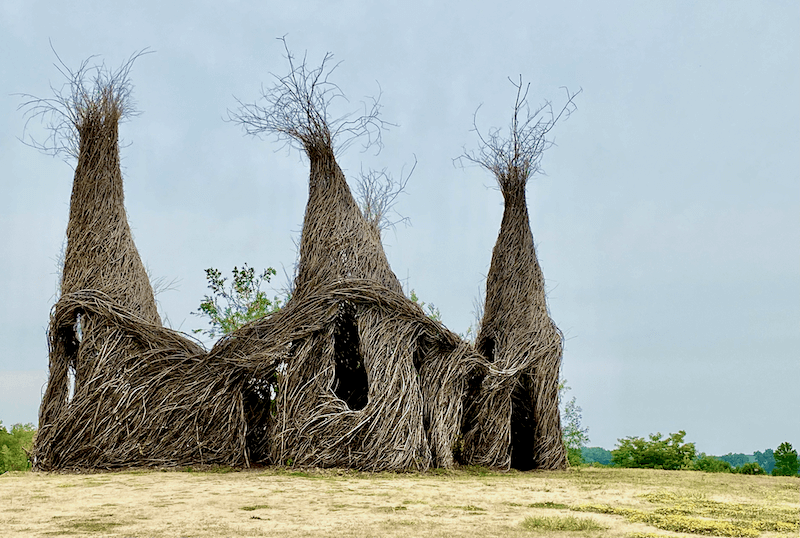 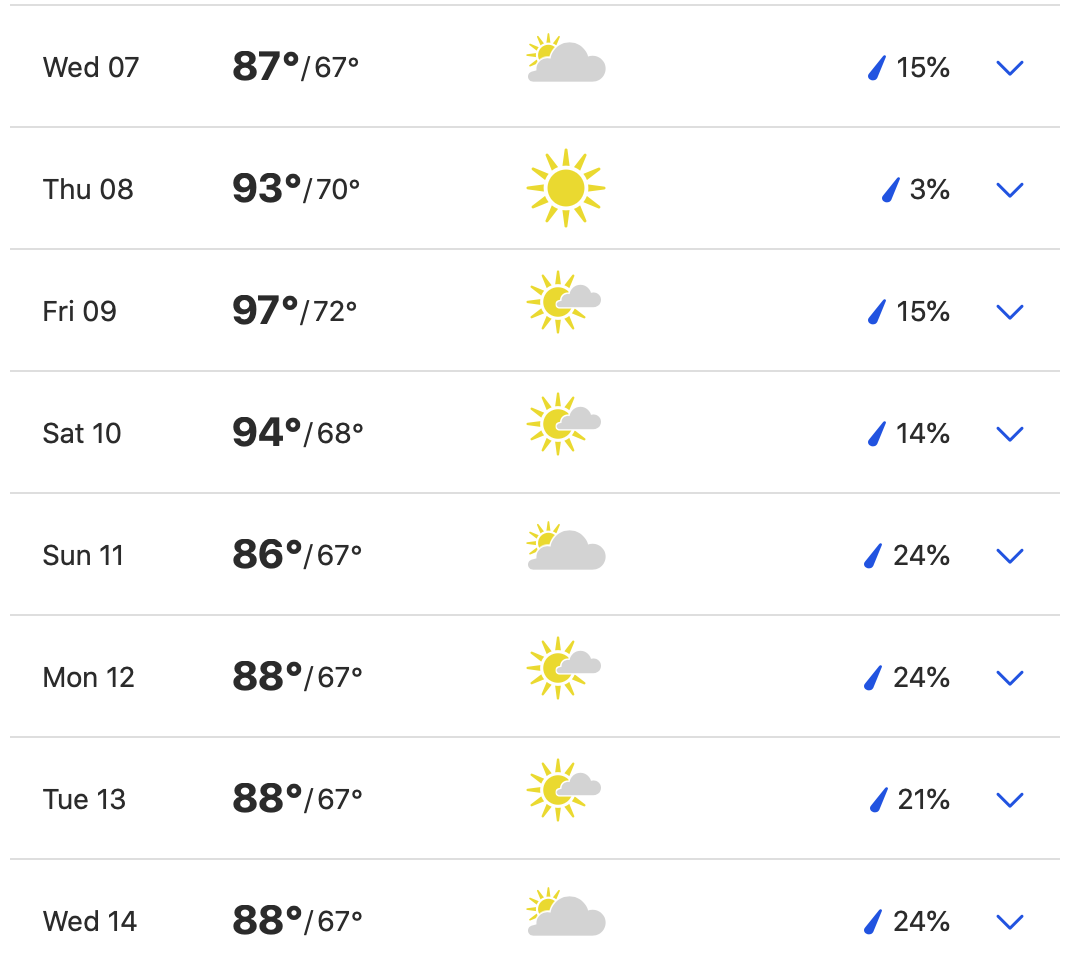 Nothing like some temperatures in the 80s to put an extra bounce in your step! And aren't we fortunate - no PacNW heat wave here, although a rain dance could help. Enjoy this week and cooler nights for sleeping.

My first "post-Pandemic" trip took me to the Twin Cities - my second time exploring the Minneapolis-St Paul area (with a likely return in September). Even if Europe or Asia or South America were on my List of Possibilities right now (none are: international travel is not in the cards for the moment), don't think for a moment that MSP (airport code) was a default destination. Absolutely not true.

Let me count the ways I love this place (or at least a few).

As an Eastern Seaboard transplant, I have never fully adjusted to the lack of verdant green to be found in my everyday NM existence. I love the sky. I love the people. But brown has never been color I can get too excited about. Even in a drought, as it is experiencing now, Minnesota is very green - and it is wonderful to walk around neighborhoods and marvel at both the wonderful old houses and their remarkably appealing front yards. Pure eye candy.

Two highlights of my visit were "MIA" (Minneapolis Institute of Art) and "The arb" (Minnesota Landscape Arboretum). The latter, considered to be the finest botanical gardens in North America, is so magnificent it almost defies description.1200 acres of professionally-maintained gardens. 80 varieties of apples & grapes for sale at the Horticultural Research Center (HRC) in season. A Japanese Garden. Flowers galore - lilies were in bloom while I was there: 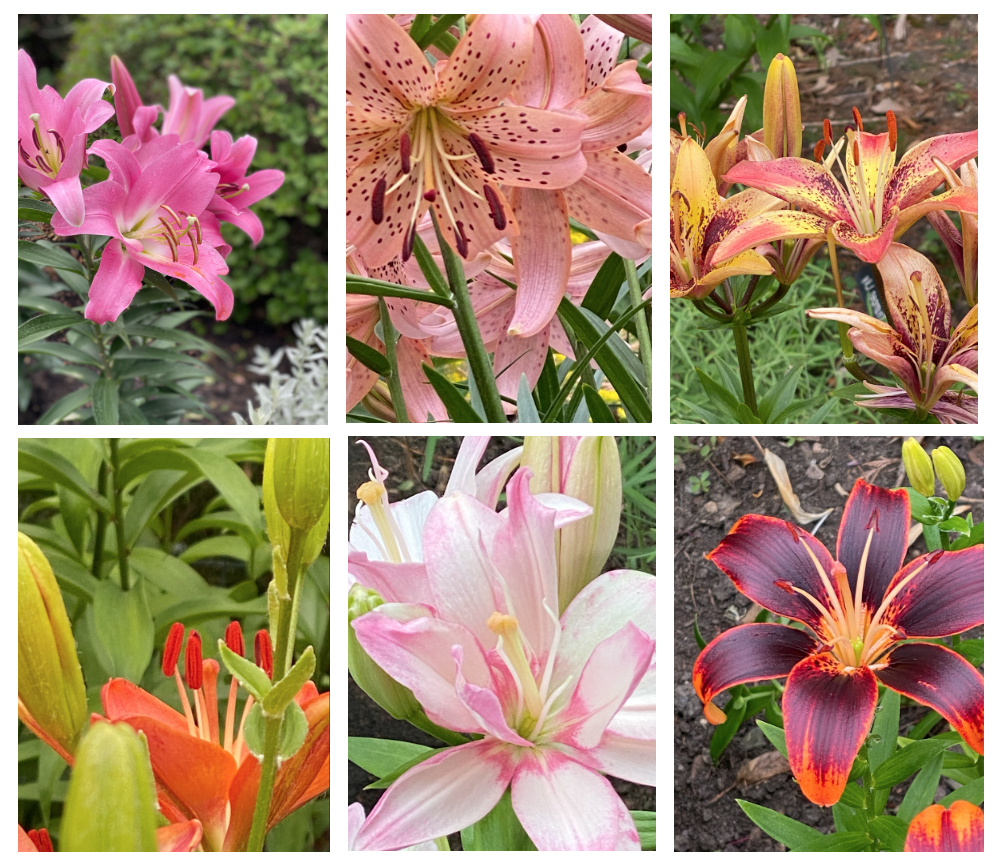 What do you know about ground cover? I NOW know I knew nothing! 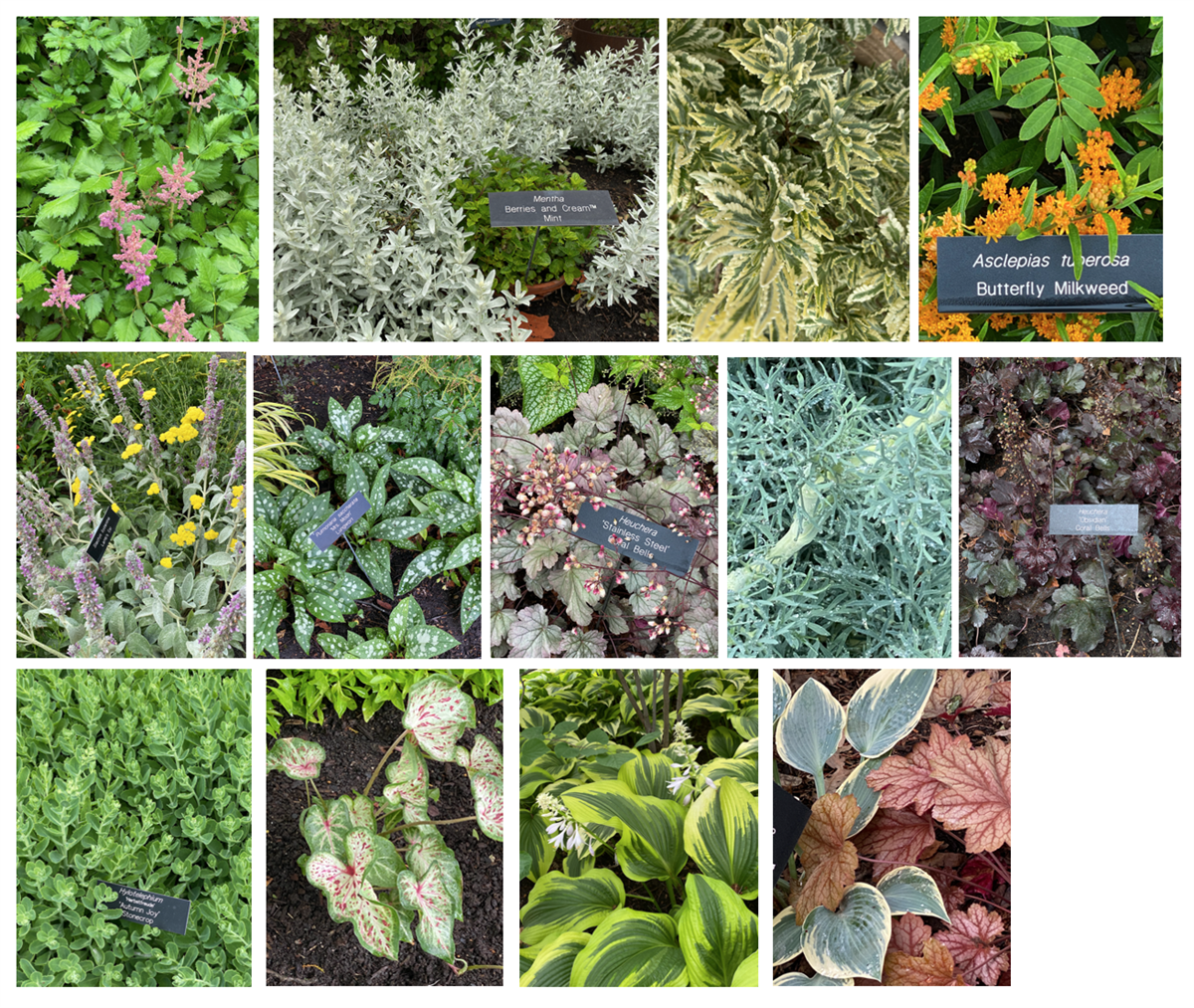 There is no dearth of fine art museums in this country, and I have loved, in particular, the Art Institute in Chicago. But mia stole my heart. There is the grandeur of the original Beaux Arts building with its graceful staircases, the warmth of the new wing, the Collections themselves and their breadth. But the presentation is...well, in a word: superb. 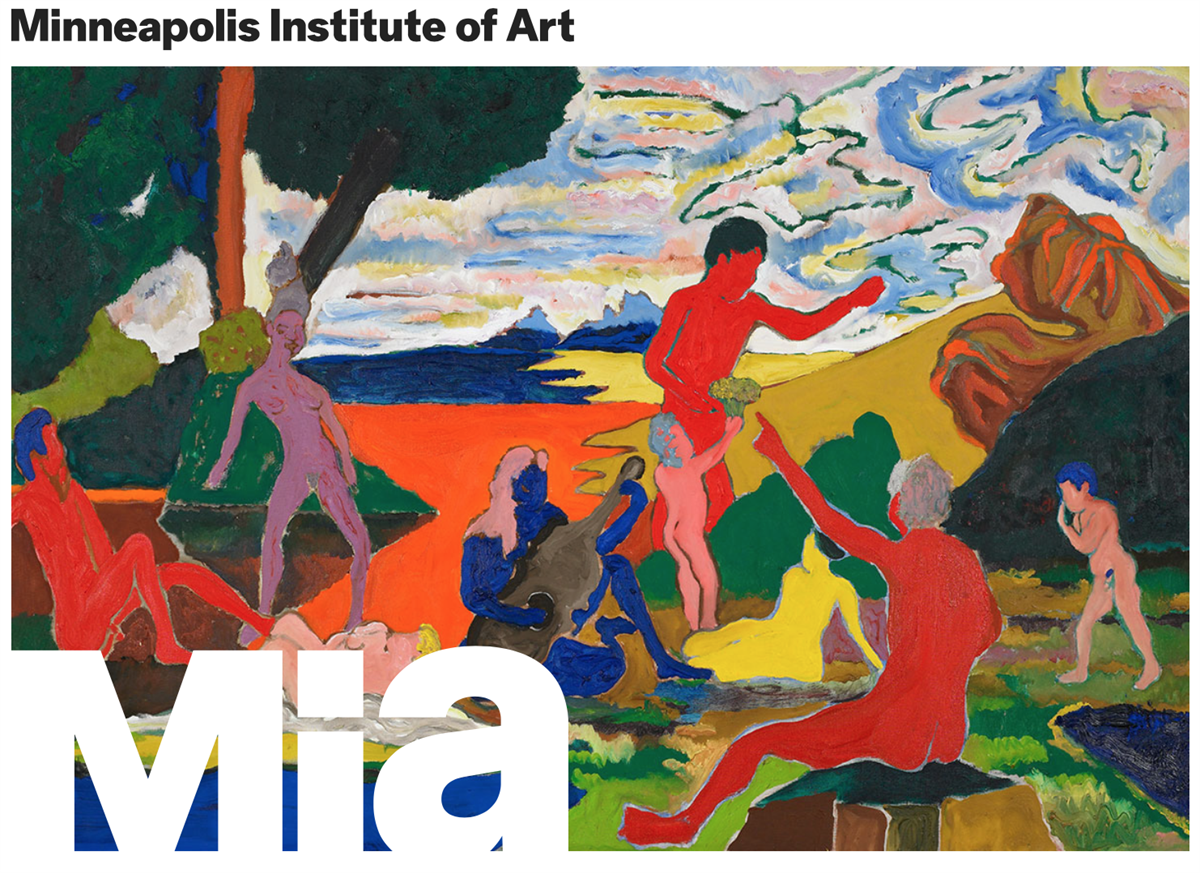 Not to be missed: 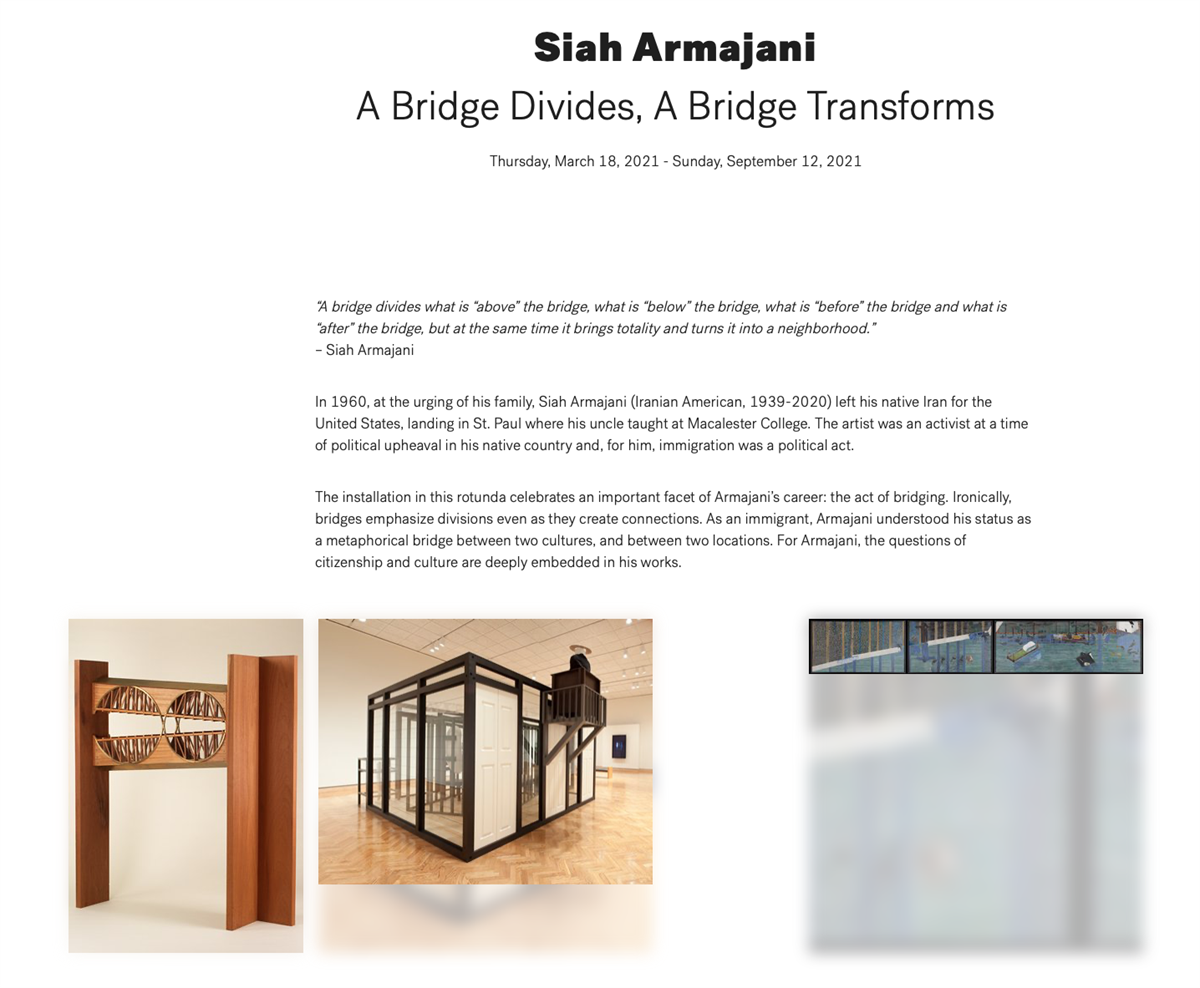 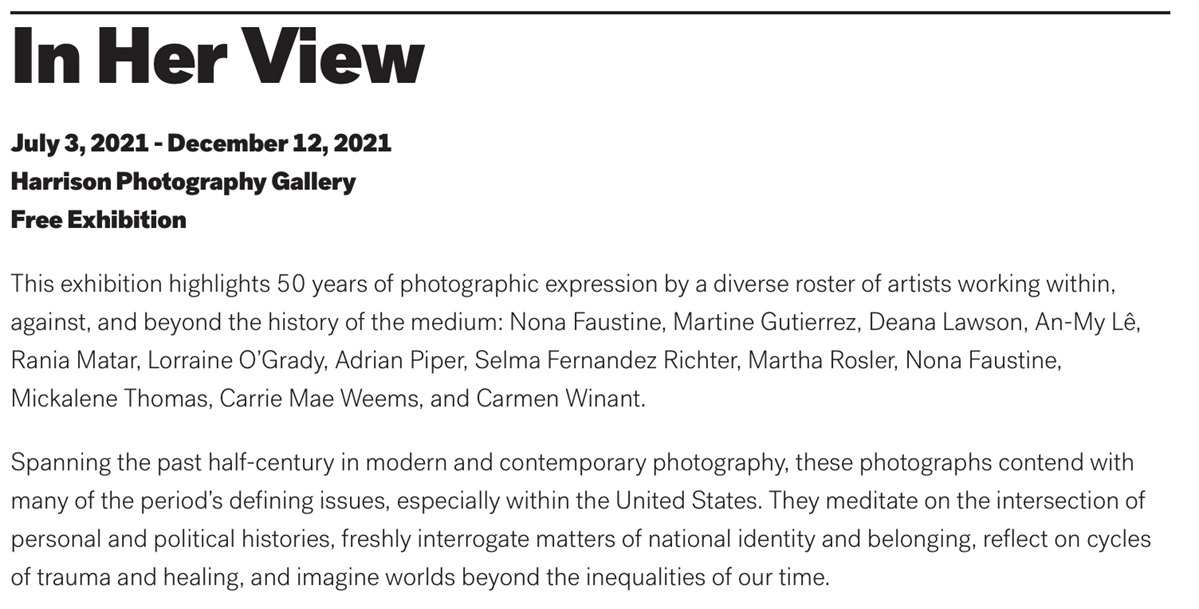 and a long overdue reunion with friends...

A Summer Stream of Consciousness 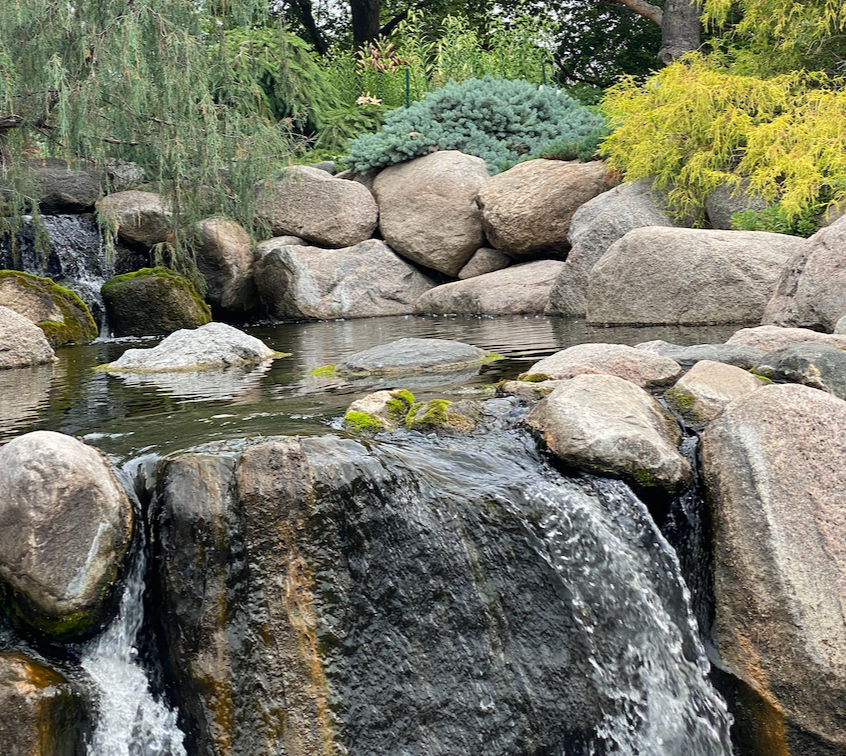 A Fourth of July Symbol of Unity That May No Longer Unite In a Long Island town, neighbors now make assumptions, true and sometimes false, about people who conspicuously display American flags. 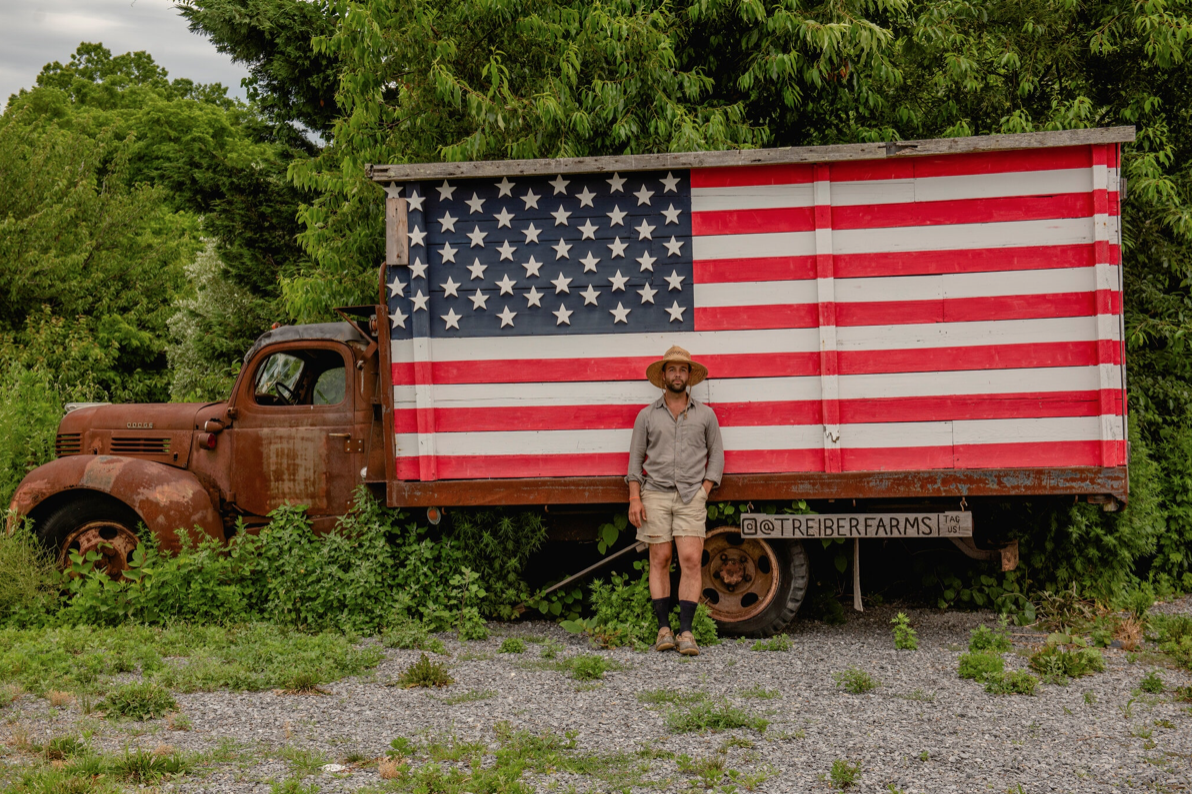 "Buildings like this don’t fall down in America.”  - Mayor Chas. Burkett, Surfside FL

The past twelve days have been grueling ones for the residents, families and friends of those killed or still missing, and first responders in this south Florida beach town, home to the 12-story Champlain Towers South condominium complex that collapsed on June 24th.

How many more potential tragedies like this are catastrophes waiting to happen? And what can we do? There are no easy solutions, and no crystal balls for this. What we do know is this: Infrastructure, in so many shapes, sizes and sources is at risk.
Climate change is an enormous challenge, and even the best constructed buildings are not immune to the damage rendered by rising water, heavy winds, and extreme changes in temperature.

The effects of climate change are not confined to Florida—wildfire season is under way in California, and temperatures have reached record levels in the Northwest—and neither is infrastructure decay. A recent A.S.C.E. (American Society of Civil Engineers) report rated the US infrastructure at large a C-minus.

Space Tourism is thought to be a $3 billion market by 2030, according to Swiss-based UBS. This month billionaires Richard Branson and Jeff Bezos are both scheduled for maiden voyages. Stay tuned - Virgin Galactic to pre-empt Blue Orion?

BEZOS / Taking reservations now (I kid you not!) - click here

Are we getting ahead of ourselves? This past weekend, Israel announced a dramatic drop in the efficacy on the Pfizer vaccine - from 94% a month earlier to a mere 64%. Huh? The culprit: variants. (Read Telegraph article here ).

As Americans grapple with the politicizing of a public health crisis, we are falling behind in our battle to end the pandemic. But the article above has some definite food for thought - 90% of new cases in the past fortnight have been from the Delta variant, and over 50% of those cases among people already vaccinated. We knew there would be a likelihood of booster shots as time went on - are we already there?  (FYI - if you don't think COVID has become a 2-sided coin (Political hoax vs. Public Health Crisis) google data on surges in Red vs Blue states.)

Britain reported the highest daily number of new COVID cases since Jan. 29 on Tuesday, and the greatest number of deaths within 28 days of a positive test since April 23.

As of the end of Monday, 86.2% of British adults had received one dose of a vaccination against COVID and 64.3% had received two doses.

How do we look? 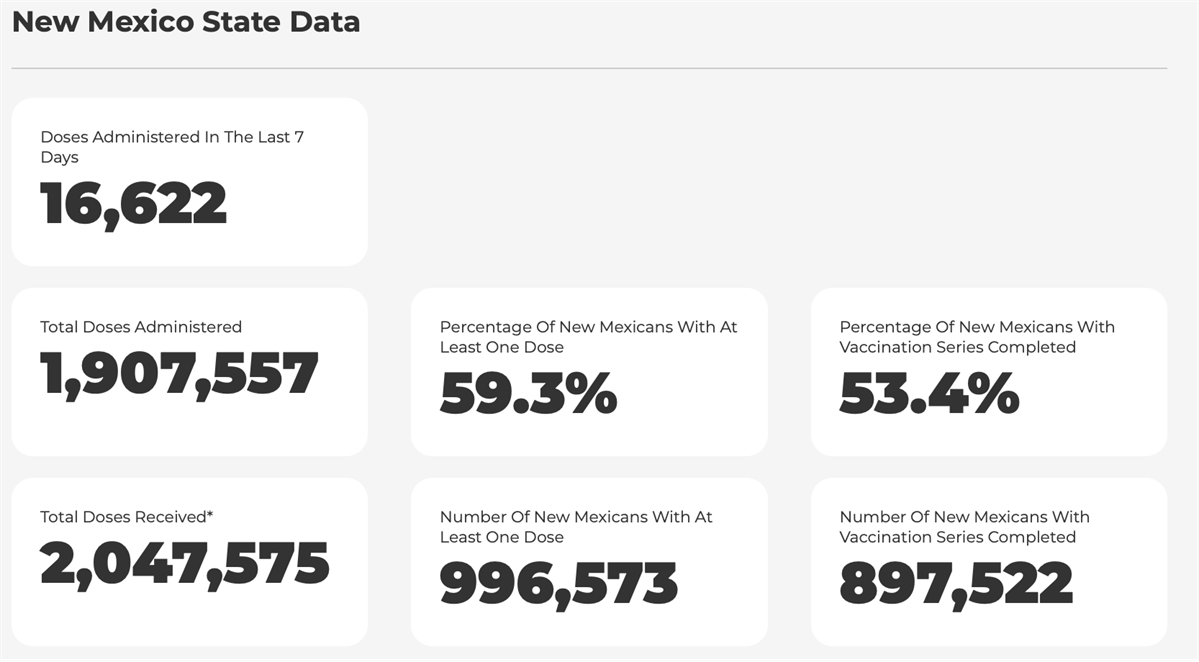 Apprx. 65% of Bernalillo County residents have been vaccinated. 1 in 3 is a potential carrier.

President Joe Biden’s target to get 70% of Americans vaccinated by July 4 was missed, not due to a lack of vaccines but due to a lack of people willing to take the shots. The hesitancy is most pronounced in rural, more conservative regions where health officials are growing increasingly concerned about the spread of the delta variant driving a surge in cases. That strain continues to boost infection numbers worldwide. (Source: CNN)

The Other Olympics
Paralympic sprinter David Brown is the world record holder in his specialty - the 100m. This totally blind athlete has an amazing "buddy", Jerome Avery. Prepare to be blown away. Read the backstory here, and then google to find current YouTube footage.

Extreme temperatures in the Pacific Northwest have stopped Olympians in their tracks, buckled roadways and brought public transportation to a standstill. How bad is it?

"Temperatures in Portland, Ore., reached 115° Fahrenheit (46° Celsius) on June 29, the highest temperature recorded there since record-keeping began in 1940; average high temperatures for this time of year are about 73° F (23° C)." (Source: ScienceNews)

Hundreds of deaths in Washington, Oregon and British Columbia have been blamed on the heat wave - while scientists are warning that the extreme weather patterns we are seeing are likely NOT 1-in-a-1,000 year occurrences anymore, but linked to the climate crisis and warming trends that come with it. Imagine: no AC, no swamp cooler and no plans to upgrade to a cooling system. Really?

We learn from our Failures . If there's a better reason to try something worth risking, something where you can't be sure you'll succeed, I'd be hard pressed to ignore this time tested truism.

Perhaps it's time to wake up and smell the coffee: Our neighbors, our communities, our country and our planet need our help.
Let's listen to science, not politicians. Let's unite, not divide. Let's lead, not follow. We have problems we need to deal with - the consequences of denying they exist are staring us in the face. 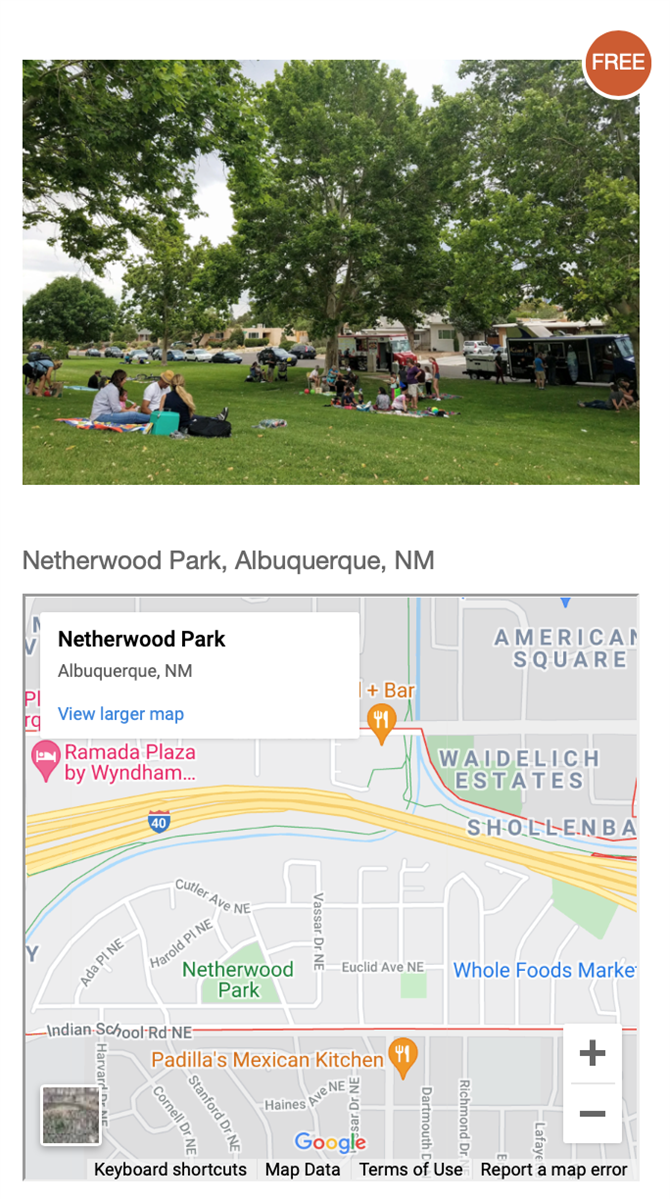 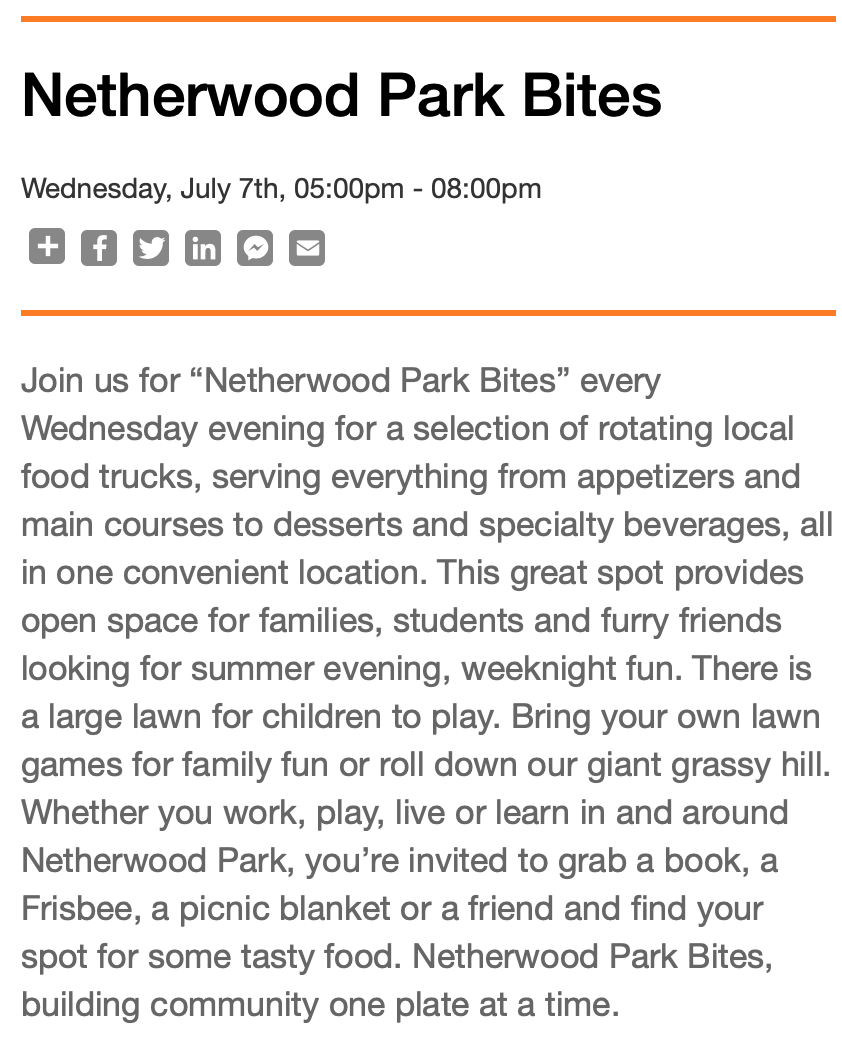 There are other neighborhoods and Food Trucks, but this is a great place to begin exploring!

Discover the wisdom of the forest with Suzanne Simard -Trees don’t only feed their own young... Many have forged complex trading partnerships with other species as well. For example, birches send sugars to firs during the summer when they are creating more than they need through photosynthesis, and firs return the favor during the fall and spring when the birches lack leaves. ...(learn more) 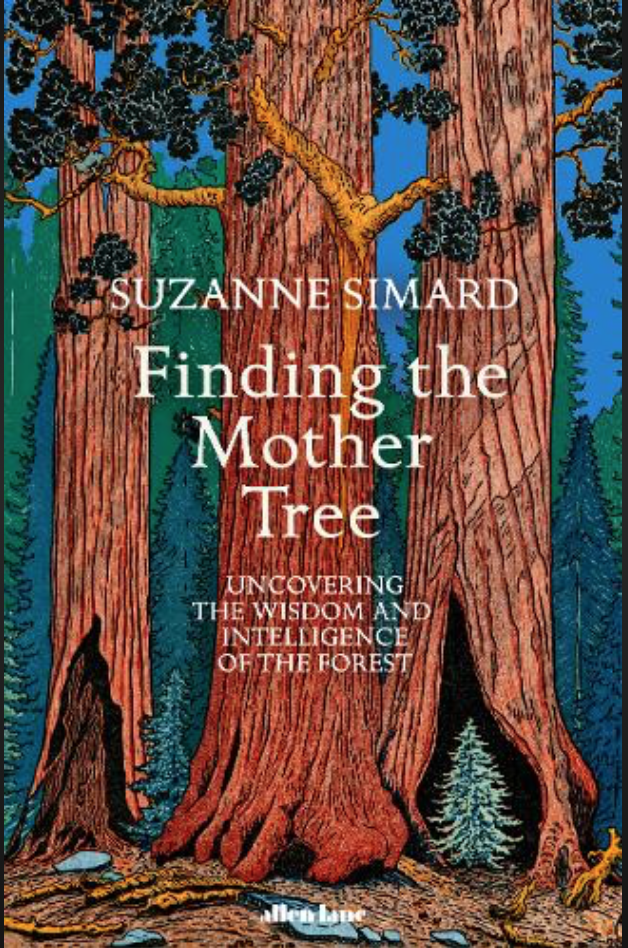 Simard, an advocate of science communication, served as the primary inspiration for Patricia Westerford, a central character in Richard Powers’ 2018 Pulitzer Prize winning novel The Overstory, in which Westerford pioneers the controversial idea that trees can communicate with each other, and is ridiculed by fellow scientists before eventually being vindicated.

A humorous aside: we had a copy of The Overstory, a gift from a great reader friend, at home. Try as I might, I couldn't find it anywhere and finally resorted to purchasing a replacement. When I eventually found a spot for it on a bookshelf, I saw it was sitting right next to the original copy. What??? Okay - if people communicate and trees communicate...I guess books, written by people about trees can communicate too...

What about those overripe tomatoes? This is now my fave recipe for a summer classic - I think the Jerez sherry is the trick. 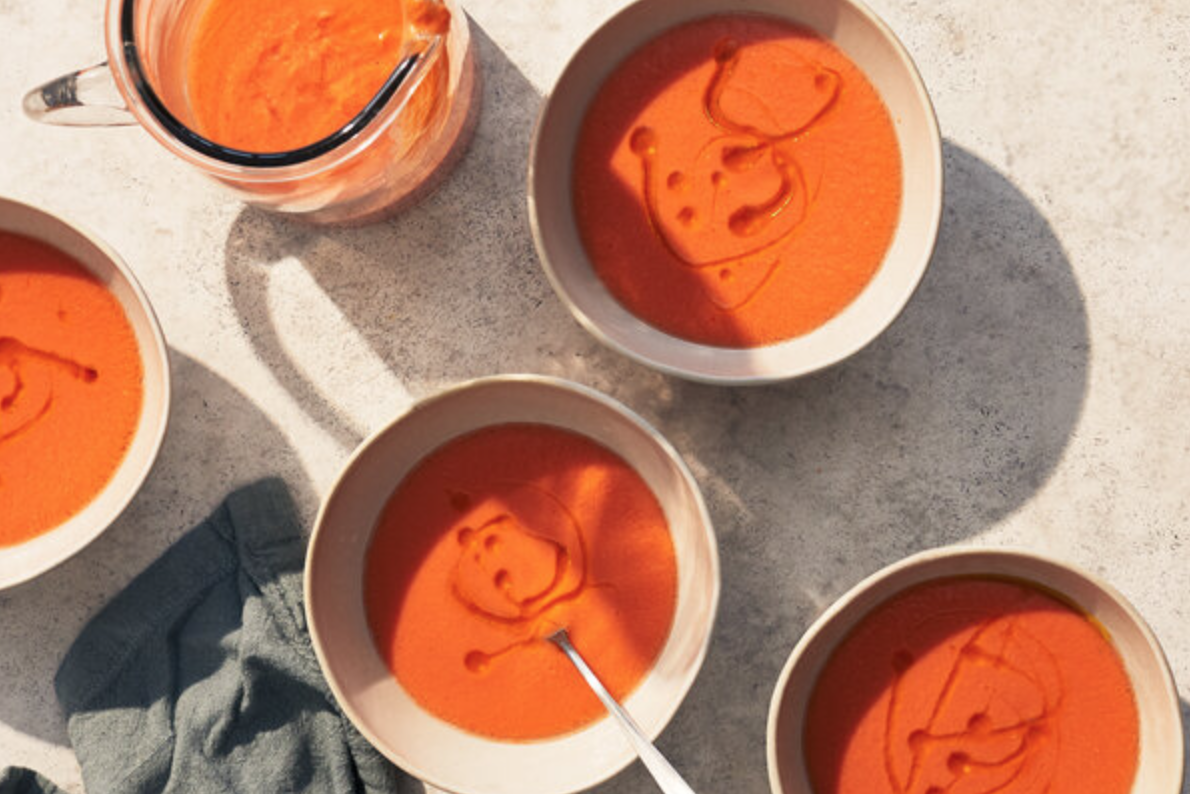 From The New York Times, The Best Gazpacho Recipe 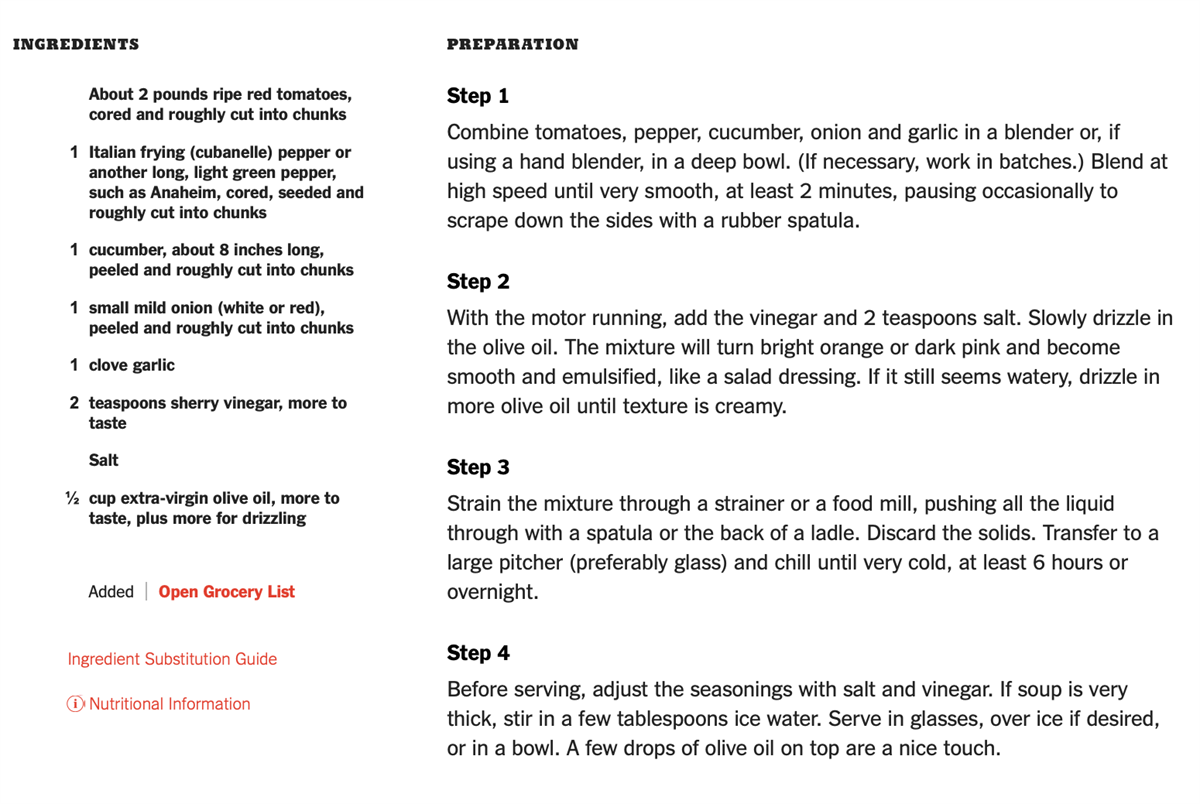 Cook's notes: Cut the OVI to 1/3 c., add a dash of cumin, and soak a half-baguette, cut into pieces and left out (or any day old bread) in sherry and add to blender. I lived in Spain for 5 years - Gazpacho with bread is much creamier and without it is like Apple Pie without a wedge of sharp cheddar. Drizzle a touch of OVI when serving. 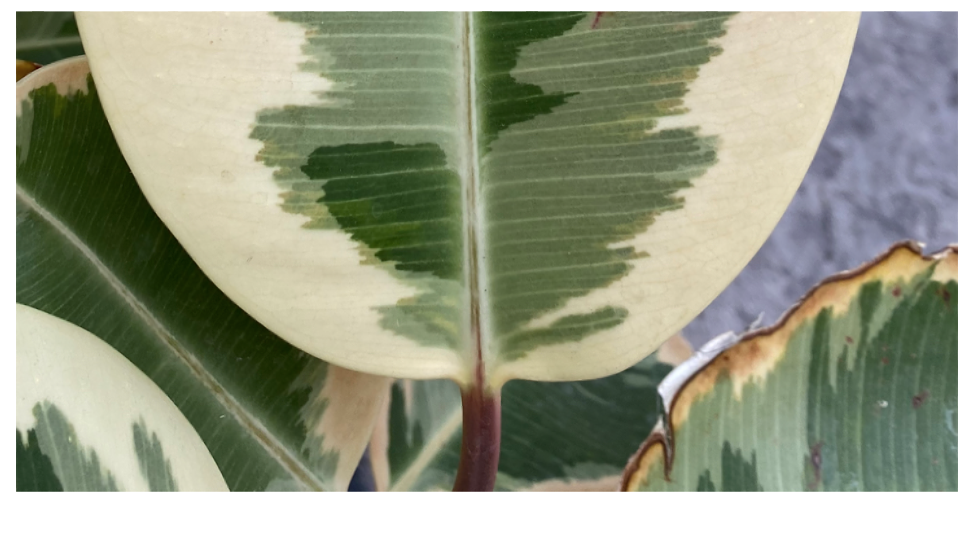 We are stronger together. Have a good week.