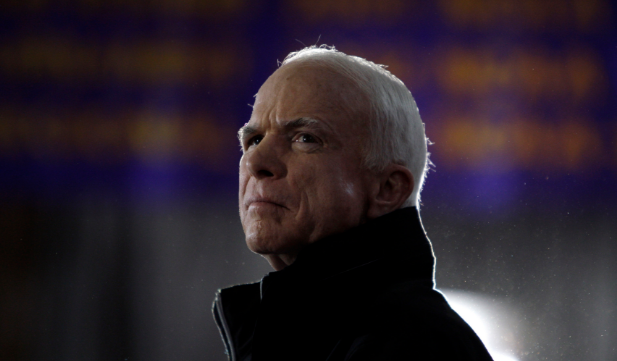 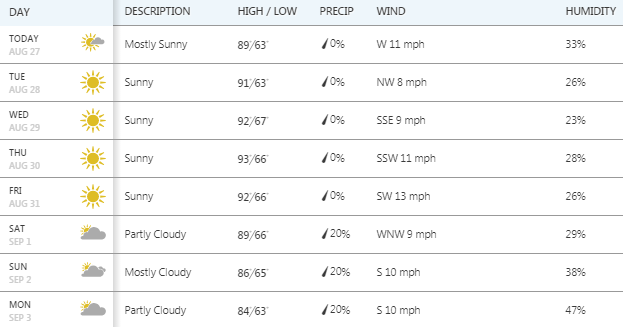 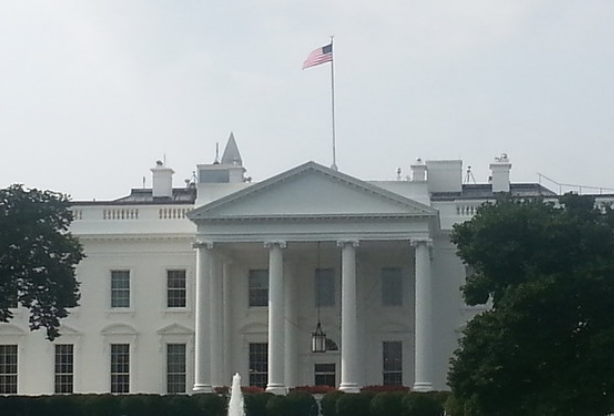 The White House in the Court of Public Opinion. The WH did not immediately issue a proclamation following the death of, who many consider, one of the most respected and influential politicians in the U.S. Such proclamations typically call for flags to stay at half-staff until the burial, which for Senator McCain will be Sunday.

After a terrible week that saw the conviction of his former campaign chairman, Paul Manafort, the guilty plea by his personal attorney charged on a variety of counts, and two close friends awarded immunity in exchange for testimony, this lack of acknowledgment might have played well to Trump's base, but is likely to amplify the continuing discussion of the character of our Commander-in-Chief. During the day on Monday rumors emerged that the "Flag-gate" kerfuffle arose against the advice of the president's advisors, notable among them: Sarah Huckabee Sanders and John Kelly. 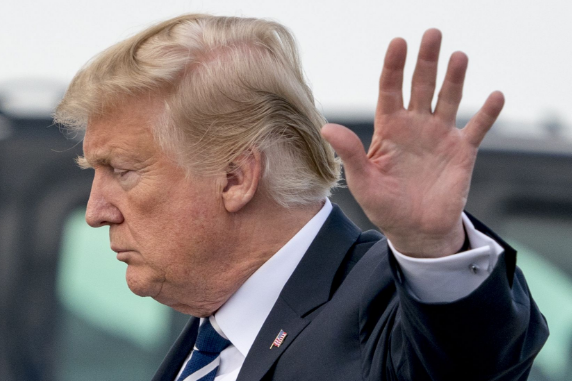 Considered by Republicans and Democrats alike as a war hero, McCain endured 5 1/2 years of torture as a POW in Vietnam (although the president disagreed with the characterization in this infamous statement: "He's not a war hero. He's a war hero because he was captured. I like people that weren't captured." ). This may have been the beginning of the acrimony existing between the Arizona senator and 45, but it certainly wasn't the end.

A veterans’ group, VoteVets, tweeted their own criticism of the president early in the day on Monday: “Donald Trump refuses to lower flag, for John McCain. As we said yesterday, Donald Trump is a pathetic, thin-skinned, self-centered, low-class, petty coward.”  To these vets, loyalty to one of their own apparently trumped loyalty to the president. 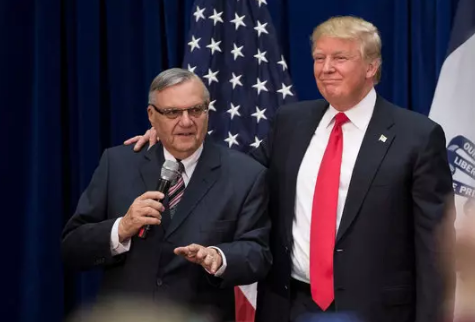 As politicos on both sides of the aisle mourn the loss of an outspoken colleague, one can't help but hope that in remembering John McCain, they will also question what constitutes leadership ...and perhaps dig deeper to exercise decency in government.

Closer to home, Arizonians have a clear choice to make tomorrow as three Republicans (former Air Force fighter pilot and Rep.Martha McSally, former state Sen. Kelli Ward, and former Maricopa County Sheriff Joe Arapaio) vie for their party's nomination. Each has tried to show they're the candidate most aligned with Donald Trump.

One thing is clear, of the three hoping to secure the GOP nomination and to fill Jeff Flake's soon to be vacant seat in November, none is cast in the mold of either Flake or McCain.

In a rare turnabout, when even the US-Mexican Trade Agreement failed to distract the nation from Flag-gate, the president acquiesced late in the afternoon and finally issued the proclamation. It is rumored that Huckabee Sanders finally prevailed - but it was the combined anger of and pleas by our veterans who saved the day and hoisted the flag full staff, once again..

On Saturday, the McCain family will escort the late senator along Pennsylvania Avenue to the Vietnam War Memorial, where they will place a wreath in his honor. At 10 a.m. EST, there will be another memorial service at the Washington National Cathedral “focused on his national and global leadership,”

The president will not attend the Saturday ceremony. 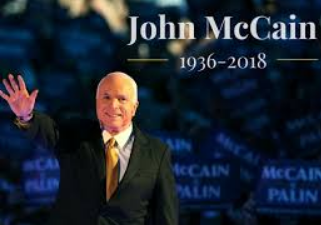 On Monday morning in Arizona, Senator John McCain’s former campaign manager Rick Davis, acting as a spokesperson for the McCain family, read aloud the text of the late senator’s final letter to the public. “These are John’s words,” he said.

What follows is a transcription of what Davis read:

My fellow Americans whom I have gratefully served for 60 years and especially my fellow Arizonians. Thank you for the privilege of serving you, and for the rewarding life that service in uniform and in public office has allowed me to lead.

I've tried to serve our country honorably. I’ve made mistakes but I hope my love for America will be weighed favorably against them. I've often observed that I am the luckiest person on earth. I feel that way even now, as I prepare for the end of my life. I’ve loved my life, all of it. I’ve had experiences, adventures, friendships, enough for 10 satisfying lives, and I am so thankful. Like most people, I have regrets. But I would not trade a day of my life in good or bad times for the best day of anybody else’s.

I owe this satisfaction to the love of my family. One man has never had a more loving wife or children he was prouder of than I am of mine. And I owe it to America to be connected to America's causes: Liberty, equal justice, and respect for the dignity of all people brings happiness more sublime than life’s fleeting pleasures. Our identities and sense of worth were not circumscribed, but are enlarged by serving good causes bigger than ourselves.

Fellow Americans, that association has meant more to me than any other. I lived and died a proud American. We are citizens of the world's greatest republic, a nation of ideals, not blood and soil. We are blessed and are a blessing to humanity when we uphold and advance those ideals at home and in the world. We have helped liberate more people from tyranny and poverty than ever before in history, and we have acquired great wealth and power in the progress.

We weaken our greatness when we confuse our patriotism with tribal rivalries that have sown resentment, and hatred and violence in all the corners of the globe. We weaken it when we hide behind walls, rather than tear them down; when we doubt the power of our ideals, rather than trust them to be the great force for change they have always been.

We are 325 million opinionated, vociferous individuals. We argue and compete and sometimes even vilify each other in our raucous public debates. But we have always had so much more in common with each other than in disagreement. If only we remember that and give each other the benefit of the presumption that we all love our country, we will get through these challenging times. We will come through them stronger than before, we always do.

Ten years ago I had the privilege to concede defeat in the election for president. I want to end my farewell to you with heartfelt faith in Americans that I felt so powerfully that evening. I feel it powerfully still.

Do not despair of our present difficulties. We believe always in the promise and greatness of America because nothing is inevitable here. Americans never quit, we never surrender, we never hide from history. We make history. Farewell fellow Americans, God bless you, and God bless America.

McCain's Senate Floor Speech re the Repeal of Obamacare

A Nation pays its respects to John McCain 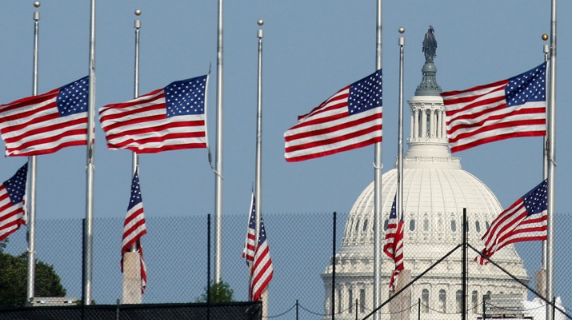 an imperfect leader who exhorted us all to do better.

Editor's Note: I often found John McCain infuriating (in particular his misogyny, his at times extreme militarism, and his bewildering choice of Sarah Palin as a running mate), but I agree with a comment I heard yesterday. We have precious few politicians in either party who are true statesmen and aren't simply self-serving performers. Perhaps as we examine (and no doubt question) the legacy of John McCain, it will motivate all of us to demand more from our elected officials.

Please Note:  The information being provided is strictly as a courtesy.  When you link to any of the websites provided here, you are leaving this website.  We make no representation as to the completeness or accuracy of information provided at these websites.  Nor is the company liable for any direct or indirect technical or system issues or any consequences arising out of your access to or your use of third-party technologies, websites, information or programs made available through this website.  When you access one of these websites, you are leaving our website and assume total responsibility and risk for your use of the websites to which you are linking.