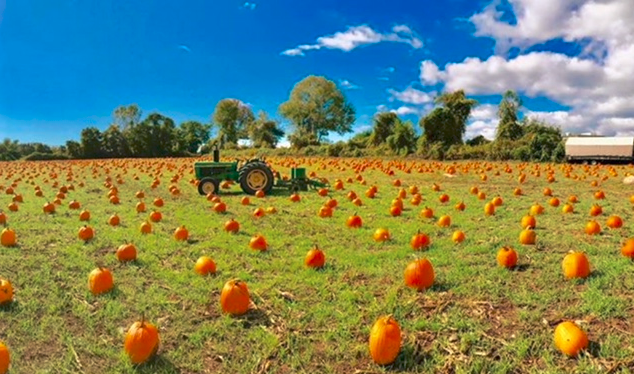 Please note: According to the forecast above, we won't have freezing temps tonight -

but you'd be well advised to check the weather later this evening. 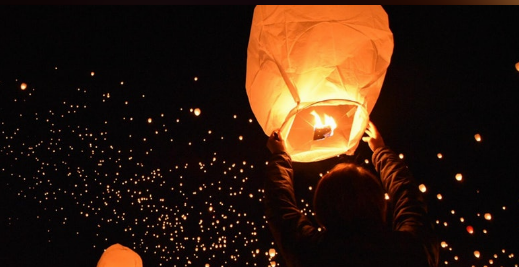 At The Lantern Fest, thousands of revelers join together armed with lanterns for one unforgettable spectacle. Before sundown friends and families can enjoy food, live music, a stage show, familiar princesses, face painters, s'mores, balloon artists and more. Then, when the time is just right, we will light the sky with our highest hopes and fondest dreams.

Lanterns will fly when the sun goes down. Be sure to arrive early enough to park, check-in and find a place to enjoy the event.

THINGS TO BRING WITH YOU

**Cold drinks and cold food will be allowed in the venue. Absolutely no outside alcohol will be allowed in the gates. There will be plenty of concessions to buy food and drinks.
A blanket or chairs for sitting
A jacket in case you get chilly
A smile, because you’re never fully dressed without it
Some money or a credit card to buy a snack or drink
Your dancing shoes! 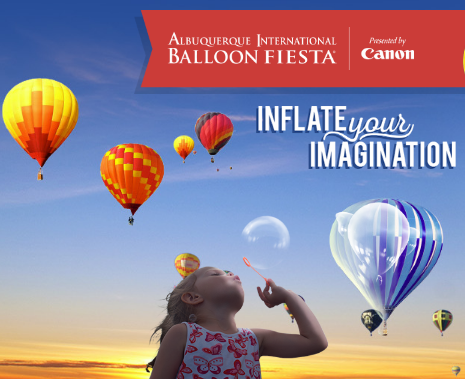 The Fiesta, which began this past weekend, extends through the Farewell Mass Ascension at 7:30 am Sunday, October 17th.

The Special Shapes Rodeo and Glo-deo are Thursday. Check the website for a full schedule. Great weather this year - have fun! 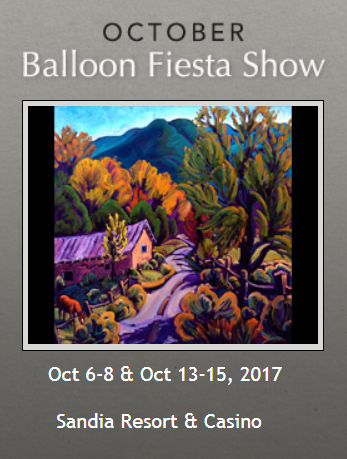 The Rio Grande Arts and Crafts Festivals have been featuring vibrant collections of fine artists and craftsmen from all over the map for the past 29 years. Rio Grande’s three annual juried art shows, each with their own distinct flavor, are ranked among the top 100 art festivals in the nation.

In October, the leaves fall, hot-air balloons rise, a big tent pops up and is filled with 200 artists, welcoming flocks of Albuquerque residents and Balloon Fiesta tourists.  Come November, family and friends pile into cars over Thanksgiving weekend to start holiday shopping on the right foot with handmade gifts at Rio Grande’s holiday show. March brings spring, sunny weather and the state’s first major art event of the year. 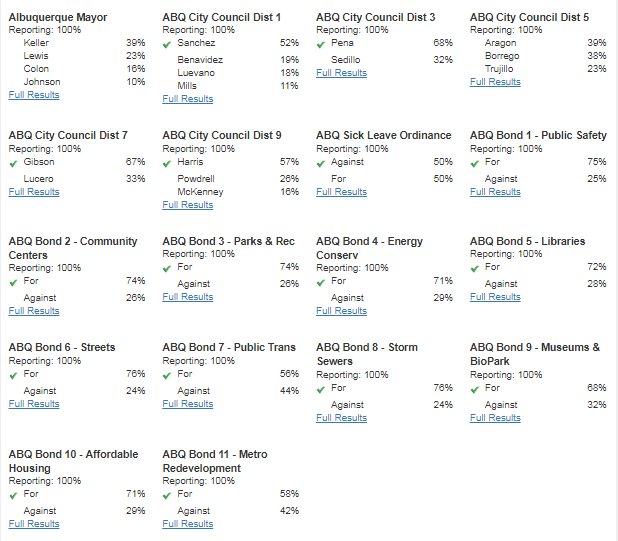 No single mayoral candidate garnered 50% of the vote in the mayoral election, ditto the District 5 race, so there will be runoff elections for both of these.

Tim Keller, the NM State Auditor, led the 8-person race with just under 40% of the vote. He will face City Councilor Dan Lewis on 11/14. Voter turnout at 30% was actually impressive when compared to 2013, when only 20% of eligible voters participated. In the last mayoral election cycle nationwide, the average turnout for the top 30 cities in the US was less than 15%, so I'd say "Good showing, Albuquerque."

Catherine Trujillo, an Independent and newcomer, split votes in the District 5 race - leaving Robert Aragon and Cynthia Borrego to slug it out on the 14th.Well, not literally, although neither pulled any punches in District 5 forum - the League of Women Voters' moderator had to ask them to tone it down as their exchange became increasingly heated. The question now is, will Trujillo's base swing to Borrego - a clear signal that they aren't buying the Santalino sales pitch: 90,000 units on the westside (vs.  "sorry, folks - there just isn't enough water to support it.").

Meanwhile, back at City Hall - or, outside City Hall: Keller's strong showing appears to reflect acceptance by both Democrats and Republicans - most likely based on his success in the Auditor's office and hands on community experience as a 2-term State Senator for the International District, both of which signal a preparedness for 2 very diverse aspects of the position. The same money fueling the ungrounded attacks on Keller will likely  be redeployed to Lewis coffers, as unlike Keller, the westside politician is pro-Santolina and development. One other issue that Lewis may have to put to bed is his history of being both pro-A.R.T and also against it.

Let's hope we have an opportunity to see both sets of candidates debating the issues and responding to substantitive questions - these are important races.

Not Registered? You can register up until 5pm on Tuesday, Oct 17th.

Los Poblanos has renovated and expanded and is worth a visit - see for yourself what they've been up to - it's impressive.

Alan Weber has announced his candidacy for Mayor of Santa Fe. Remember when he and Lawrence Rael split the vote and the Dems had to settle for Gary King 's taking on Martinez for guv?

$200,000  touch down - estimated cost to US taxpayers when the VEEP dropped in for the Colts-49er game. Where are you on this? Personally, I think the flag and the National Anthem embrace both sides - vets, members of the Armed Forces, AND all US citizen's freedom of speech and right to peaceful protest. What is unfortunate is the ratcheting up of the rhetoric... 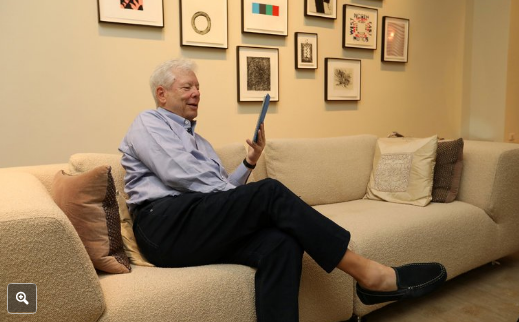 You heard it here first - Majdah's been reading  Richard Thaler and talking about behavioral economics for the past year and a half. And isn't it great that the Nobel committee recognized the value of his work? ( Behavioral Economics marries the work of psychologists with that of economists to produce better models of human decision-making).

Magnesium - a good research project for all of us. First read about why it is so good for you and then see all the great natural sources. You'll be glad you did...

Calling All Dog Lovers (cats too): Time to Suit Up!! 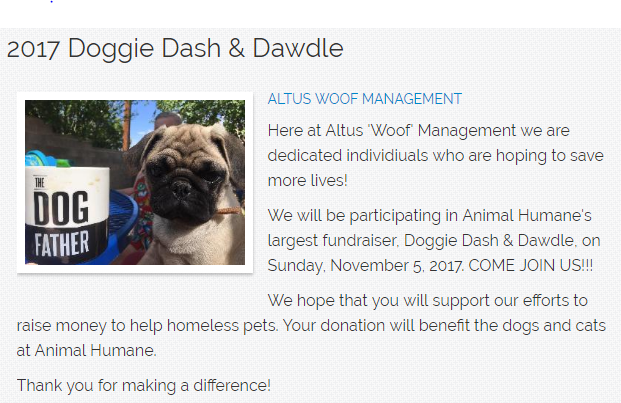 It will be a fun day for a great cause and the kind of dog days and Cat-ness we can really get behind!

If it's raining you-know-whats, have no fear - we'll have a good Plan B. 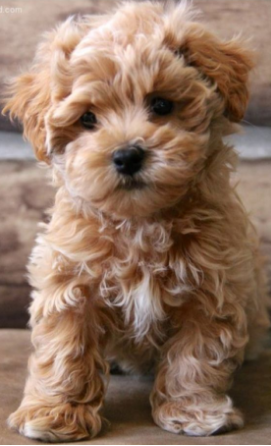 Sign me up: Maltipoo puppies are a combination of a Maltese and a Poodle. Known for their fun, devoted, and affectionate nature, these adorable dogs make wonderful pets for all kinds of families and living spaces. They are clever and quick to learn.