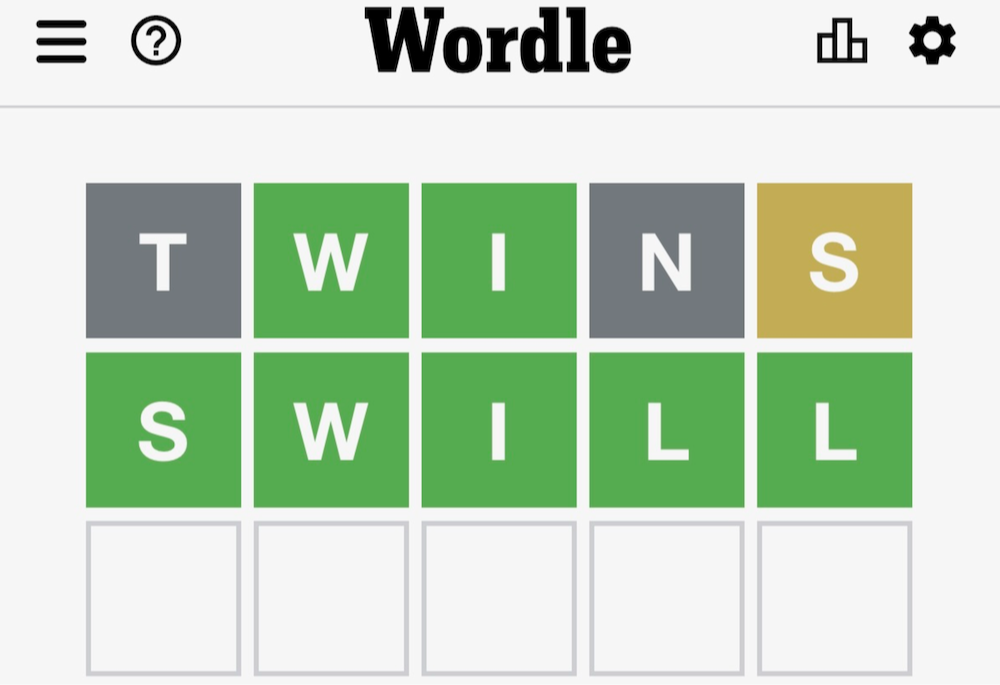 Pictured above: Luck and the Wild Guess

Abq Weather or Not 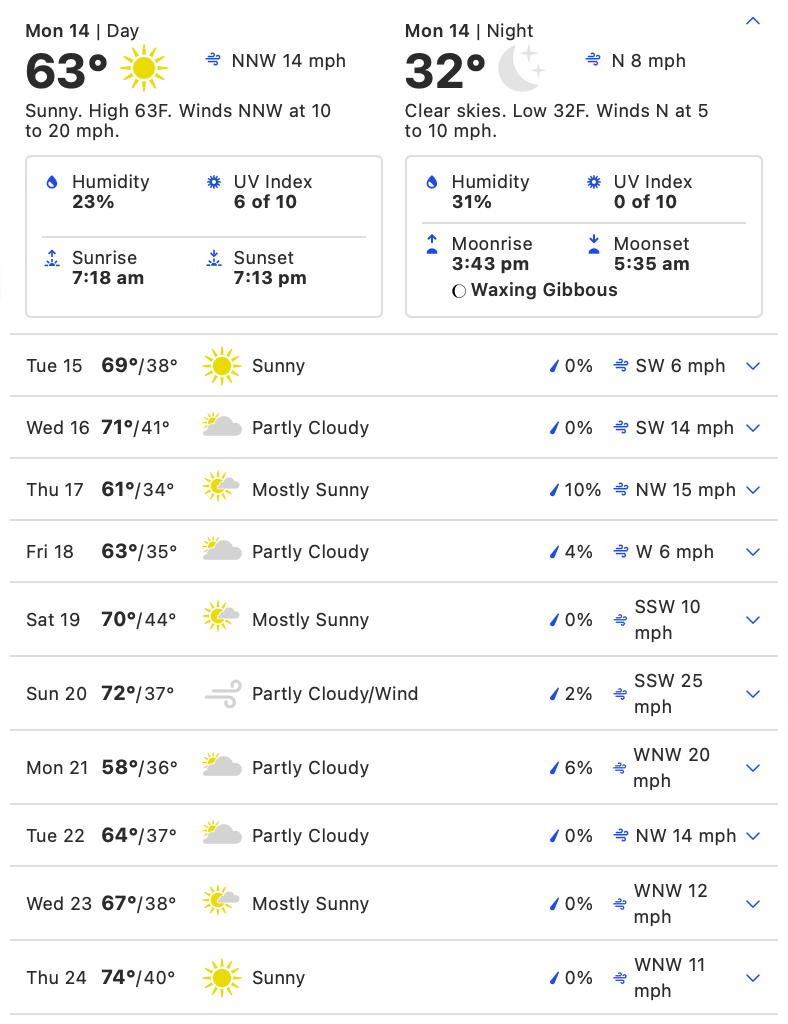 The first time I ever heard of Albuquerque NM was from my grandmother, who had visited my aunt and uncle while stationed at Kirtland AFB. I was  5 years old and mesmerized by: "It was almost not to be believed! When I awoke, there was so much dust on my lashes, I could barely open my eyes!"  Yesterday, I thought of Grannie V, as I do every time those March winds blast across the landscape. Close your windows!!

So here we are - caught between February and April: time to tackle Spring chores and stop avoiding those ignored winter projects.

Time to dust off that old Parsley, Sage and Thyme album and hum along to "Cloudy..."

The sky is grey and white and cloudy

Sometimes I think it's hanging down on me

And it's a hitchhike a hundred miles...

What's It All About, Josh? 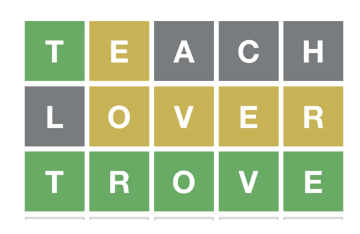 WORDLE. Love it or hate it, you can't ignore it. And if you're like the millions of people scattered across the globe, playing it over your first cup of morning joe, Wordle has become your canary in the coal mine for how your day's going to shake out. 2/6 or 3/6? Looking good. 4/6 - meh. 5/6 or 6/6? "I wanna go back to bed."

How did Wardle become Wordle? And who is Josh Wardle anyway?  Click here for "The Love Story"  and a bit of background. Unfortunately, a view shared by early Wordle-ers, Love with a price tag doesn't always have a happy ending. Josh walked off with "low-seven-figures," and is no longer paying $100 per month to allow access to more people (90 in November 2021) than Palak Shah.

The New York Times purchased Wordle in January, and while over 3 million people across the globe are now playing Wordle on a daily basis, the friendly canary has a dark side. First, a likely "game over" when it comes to free access. And number 2: The "gotcha element" where there is a greater frequency of double letters, which is an annoying twist - but nowhere nearly as infuriating as another ploy. How many times in the last two weeks have you managed to figure out 4 of the five letters and still had MANY MANY choices of acceptable words?

Those two twists or tricks are not the Wordle we knew and loved. I have a few suggestions, if being an average 3/6er is something you aspire to: practice and hone your skills on Hello Wordl, find yourself a letter frequency chart for American English, resist the urge for wild guesses, and employ a little strategy.

I'm a 3/6er. I think being a 2/6 is pure luck. 3/6 as an average is something achieved by about 17% of Wordle players (33% guess in 4 - the highest percentage) and I think if you settle for regular play getting you there, you'll have a long wait.

If you're interested, my strategy is this: until you know 3-4 of the letters contained in the daily hidden word, do not use any green or yellow letters in subsequent guesses; you're wasting them when you should be maximizing discovery of the remaining letters. If you can't avoid using them, use the yellow letters in new positions and maybe they'll become green. 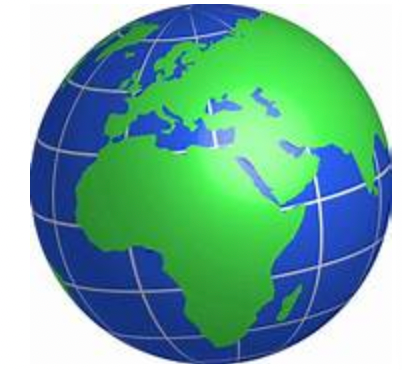 The Charity Navigator is a good place to start if you'd like to help the victims of the Ukraine-Russia crisis. It gives you an idea of what organizations are doing, how they do it, and how much of your dollar reaches the intended beneficiary. There are a lot of choices, but here are a few I've heard are particularly good:

The i's Have It 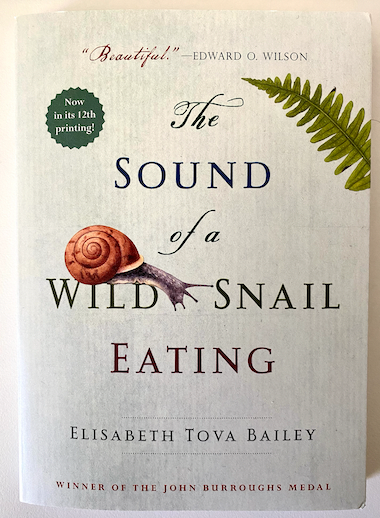 This was a gift from a friend, who was in the midst of reading it to her mother. "Real it out loud to each other, a chapter at a time." And we have - to the point of parceling out the final chapters to prolong the inevitable, finishing an absolute treasure of a book.

And apparently it has captivated others - a broad swath of readers:

Elisabeth Tova Bailey's natural history/memoir, The Sound of a Wild Snail Eating, received the 2012 William Saroyan International Prize for Nonfiction, a 2011 John Burroughs Medal Award for Distinguished Natural History, a 2010 National Outdoor Book Award in Natural History Literature and a Gold Award from Foreword Book of the Year for Memoir and was selected as a top ten Science & Technology title for 2010 by the American Library Association and one of the Best Books of 2010 by Library Journal and The Huffington Post. Editions/translations are available in the U.S., UK, and Australia/New Zealand, Germany, France, China, Korea, Taiwan, Germany, and (forthcoming) in Japan.

The Sound of a Wild Snail has found a special home in the medical humanities field with coverage in Academic Medicine, Hektoen International, The Yale Journal for Humanities in Medicine, The Bellevue Literary Review, The Journal of the American Osteopathic Association, Advance for Nurses Book Club and numerous national patient publications. The book is also being used in secondary and higher educational settings.

Chances are your interest in snails is somewhere between nonexistent and mild curiosity. Pretty much where I was before I became hooked by an otherwise innocuous discovery: the writer discovered her snail had chewed a hole in a pill label...a square hole. Chapters later my awakened curiosity was rewarded: 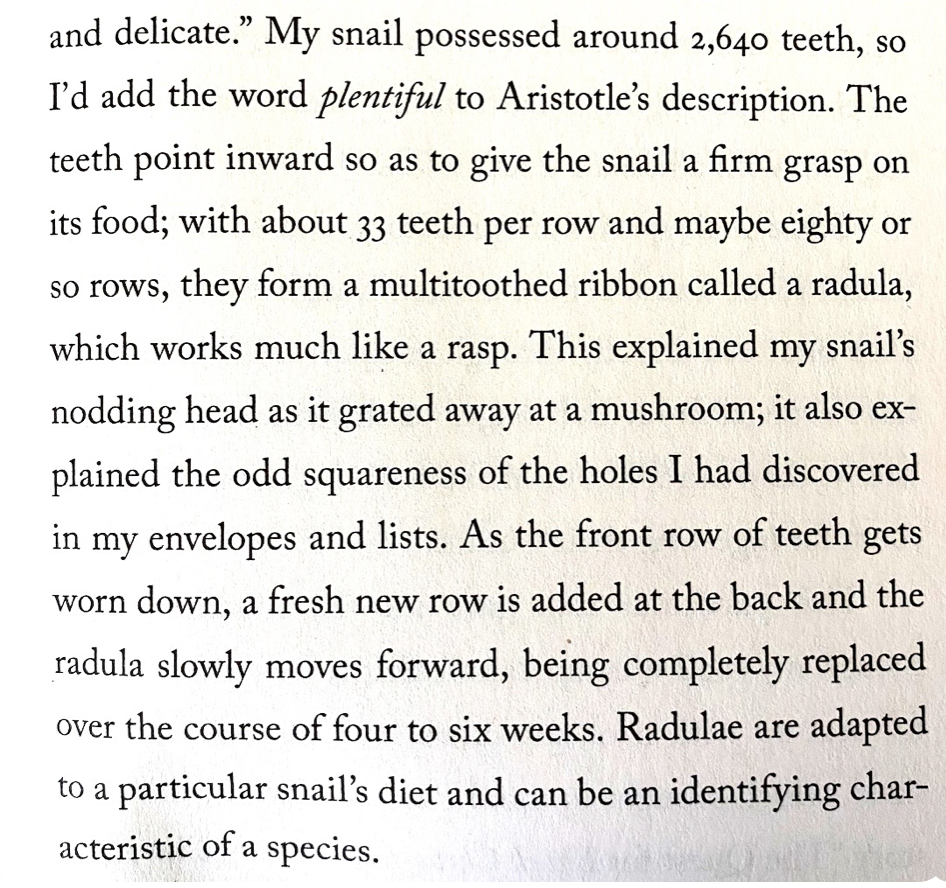 2,640 teeth? A radula that works like a rasp? I love learning new things, but it never occured to me there was room for snails

Not convinced? Check out this "6-Minute Listen" from NPR, The Sound of a Snail: A Patient's Greatest Comfort.

iWatch (or will be watching)

Two weeks before the Academy Awards. YIKES! The pandemic made it difficult to stay on top of what was out there and I am woefully behind.

How about printing out a BALLOT to help you track down some of the nominations? If you still are avoiding theaters, you can stream many of them - some for free.

Penelope Cruz is nominated for best actress for her role in Almodovar's latest, PARALLEL MOTHERS. It's terrific and you can rent it on prime.

(And we all know who Penelope Cruz looks like... 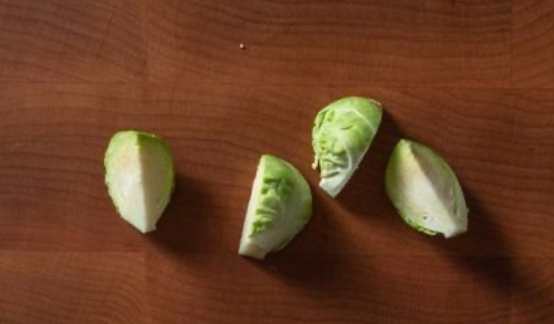 Going for Broke. These Brussels Sprouts are quartered for a reason. I am just passing this along as a PSA:

For the I Hate Brussels Sprouts and Will Never Try Another Recipe among you, here's the recipe that did the trick for me.

Wash and trim your sprouts. (Trim = cut off any remaining stem, and discard any wilted or discolored leaves.)

Bring the water in a pot or steamer up to a boil.

While the water is heating, quarter the Brussels sprouts and let them rest for exactly 10minutes.

Add the rested sprouts to the boiling water and cook for exactly 10 minutes.

Remove from water and eat. (Salt and pepper, and a little butter work for me). 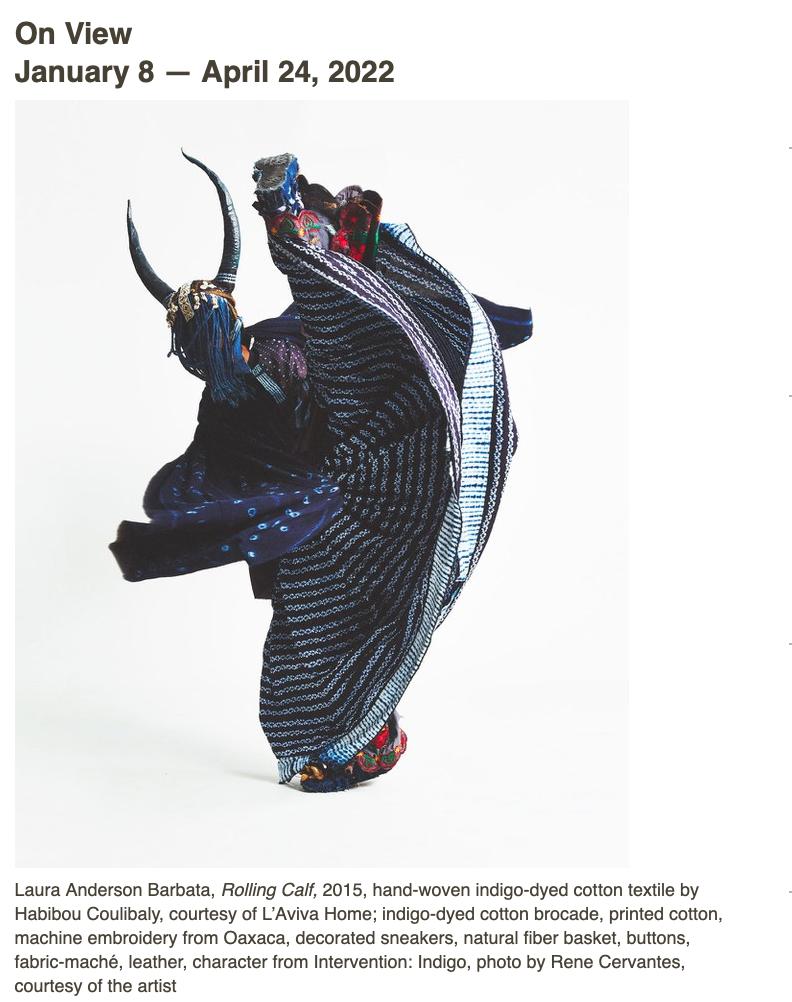 This exhibit is WONDERFUL! Catch it before it leaves on April 24th.

Online ticketing, even if you're a member - click on the square

The Last Word - Speaking of Swill... 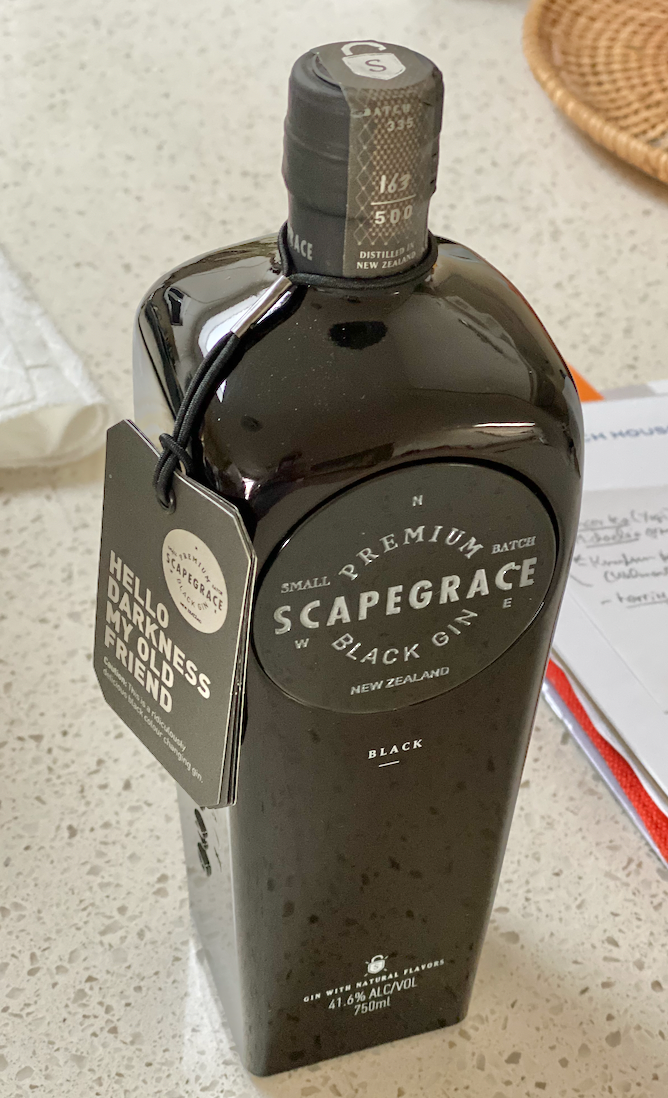 SCAPEGRACE isn't just another pretty face. It's an artisanal gin from New Zealand that can hold its own in competitions. But it's also fun to have on your shelf.

Picture this: Cleaning a fountainpen that had black ink in it. You dip the tip into a small glass of water and it releases the ink. The water becomes an inky grey.

Now picture this: Instead of inky-water, the glass is filled with gin the same color. Add a few ice cubes and a splash of Fever Tree tonic water.

Voilà! You now have a rose gold  Gin and Tonic. Uhmmm...for real?

What makes the gin black? It gets its color from a unique collection of natural botanicals including Aronia berry, saffron, pineapple, butterfly pea, and sweet potato. Each of the botanicals is distilled at a precise temperature in a specific sequence to make the drink black.

What makes the Gin and Tonic rose gold?  Once the gin is mixed with tonic, it changes color to shades of red, purple, and pink thanks to a pH reaction between the drinks.

You get a little party trick along with your G&T. 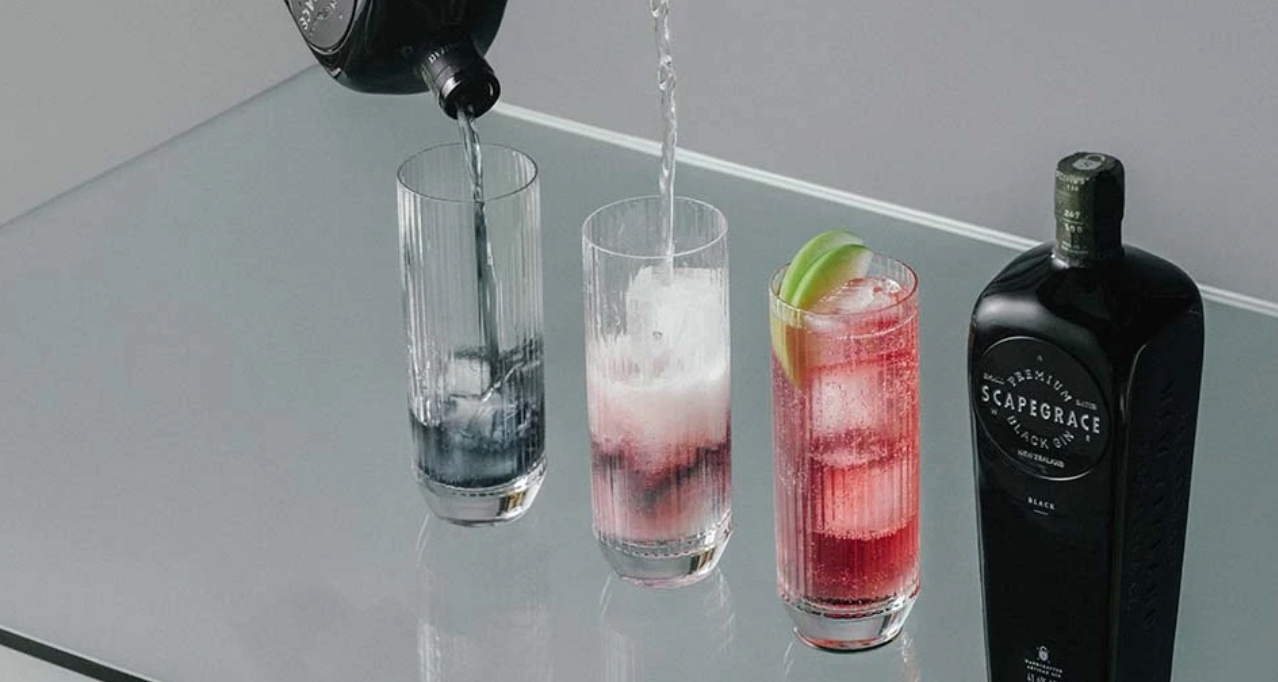 Happy St. Patrick’s Day 3/17, followed by Awkward Moments Day on the 18th. Whatever you celebrate, we wish you a fun and healthy week.